The German word Handdruck means both “handshake” and “hand printing”. Handdruck is also the name of the series of screen-printed textiles and objects produced in Bolzano, Italy, by an international collective of textile designers and artists between the 1970s and the early 1990s.

The collective was founded by textile engineer Otto Von Aufschnaiter and his wife Carmen Von Aufschnaiter, an illustrator, together with artist Anna Wielander Platzgummer, architect Anton Hofer and textile designer Erna Hitzberger. The production took place in a self-built screen printing workshop in the backyard of their shop, but came to an end in 1993. Since then, the screens have gone missing and just a few samples and original drawings remain. The material was found and documented for the first time in 2012, and was redesigned into the Neue Serie Handdruck in 2017.

Anna Wielander Platzgummer is a South Tyrollean artist and teacher. After her studies at The Academy of Fine Arts in Munich, she moved back to Italy in 1961 to attend the Faculty of Textile Design at the University of Florence. The works she designed for Handdruck are inspired by nature and the rock-carved symbols in the Dolomite mountains. She was most active in the Handdruck collective during the 1970s. 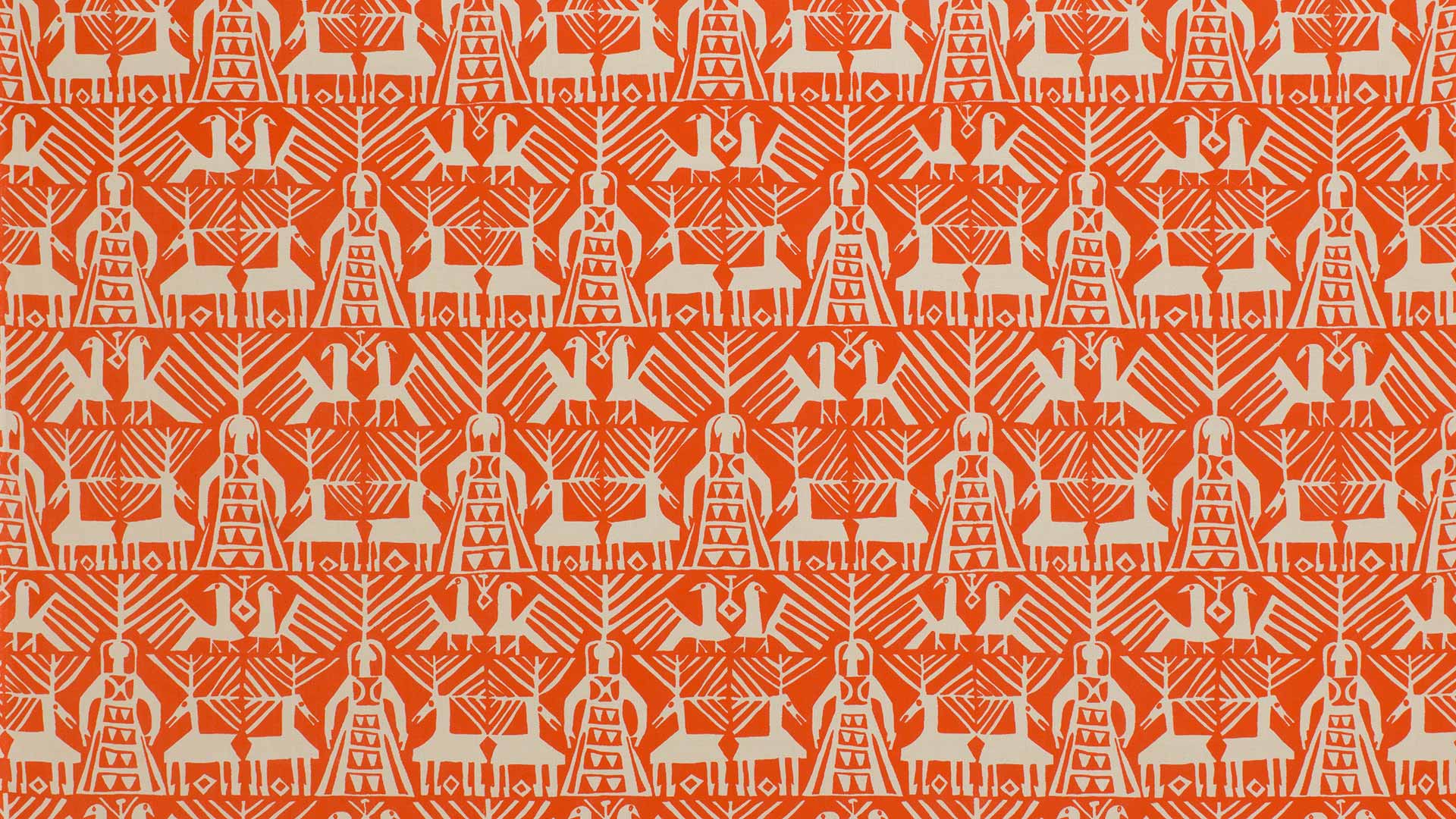 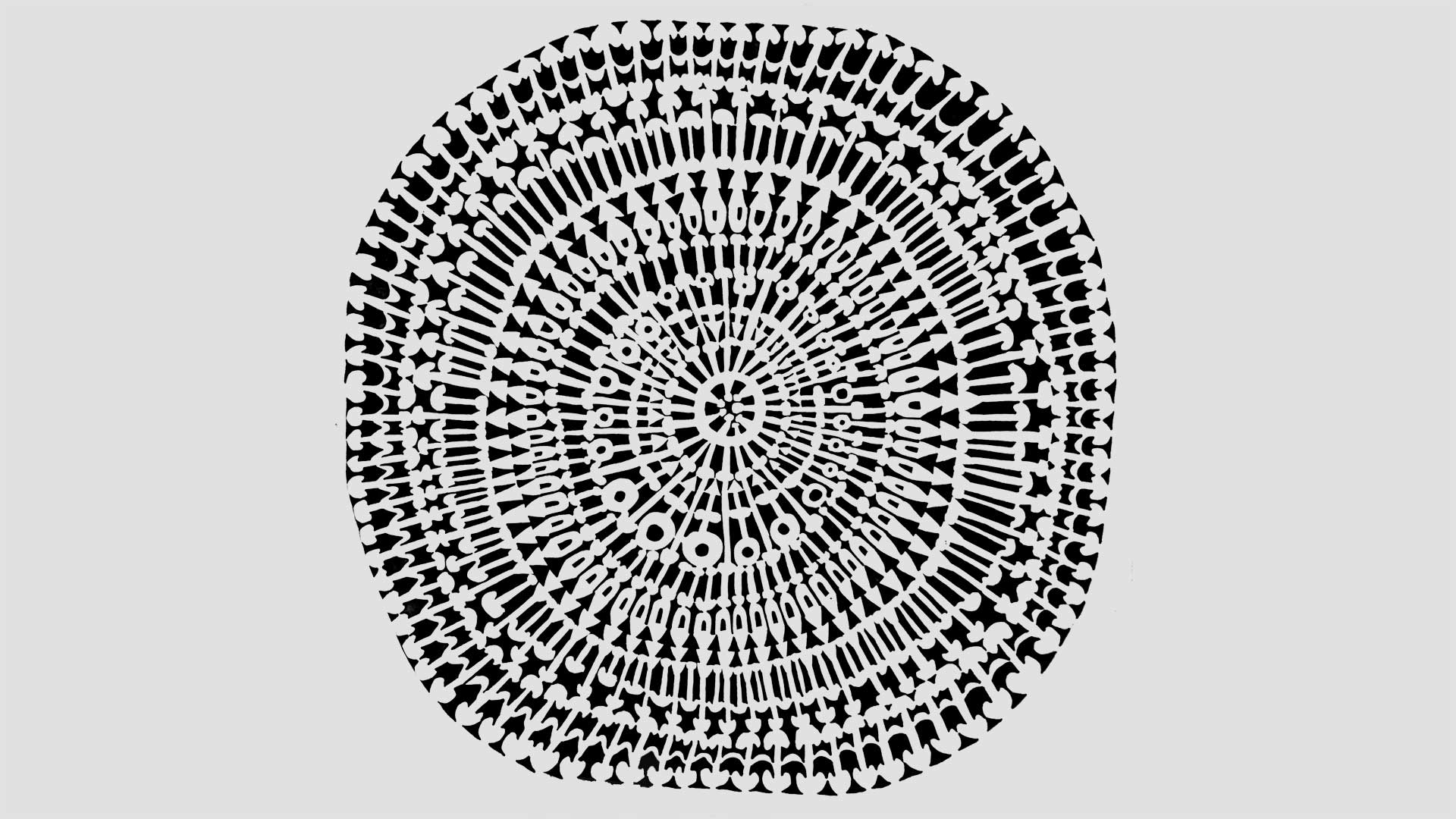 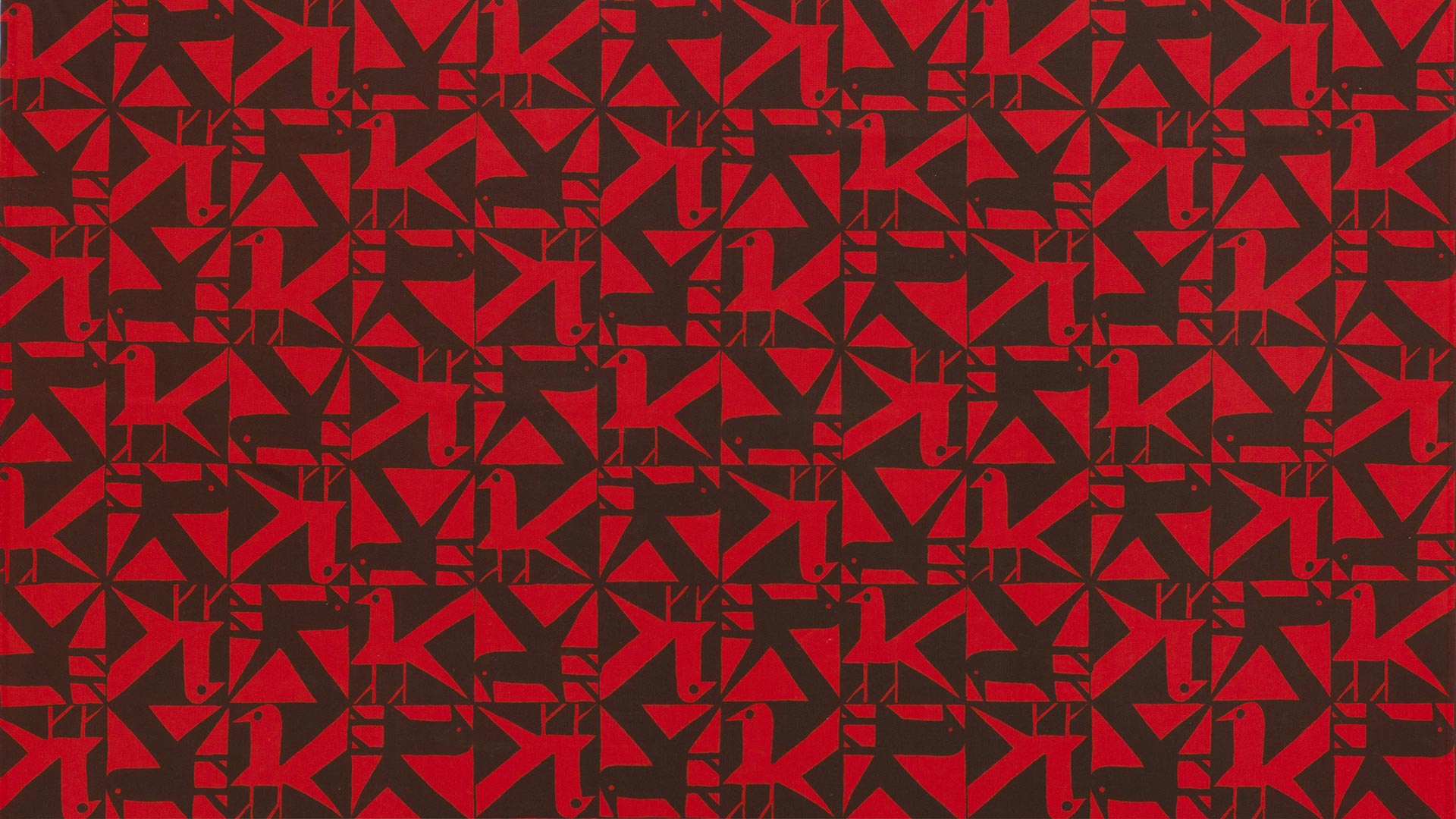 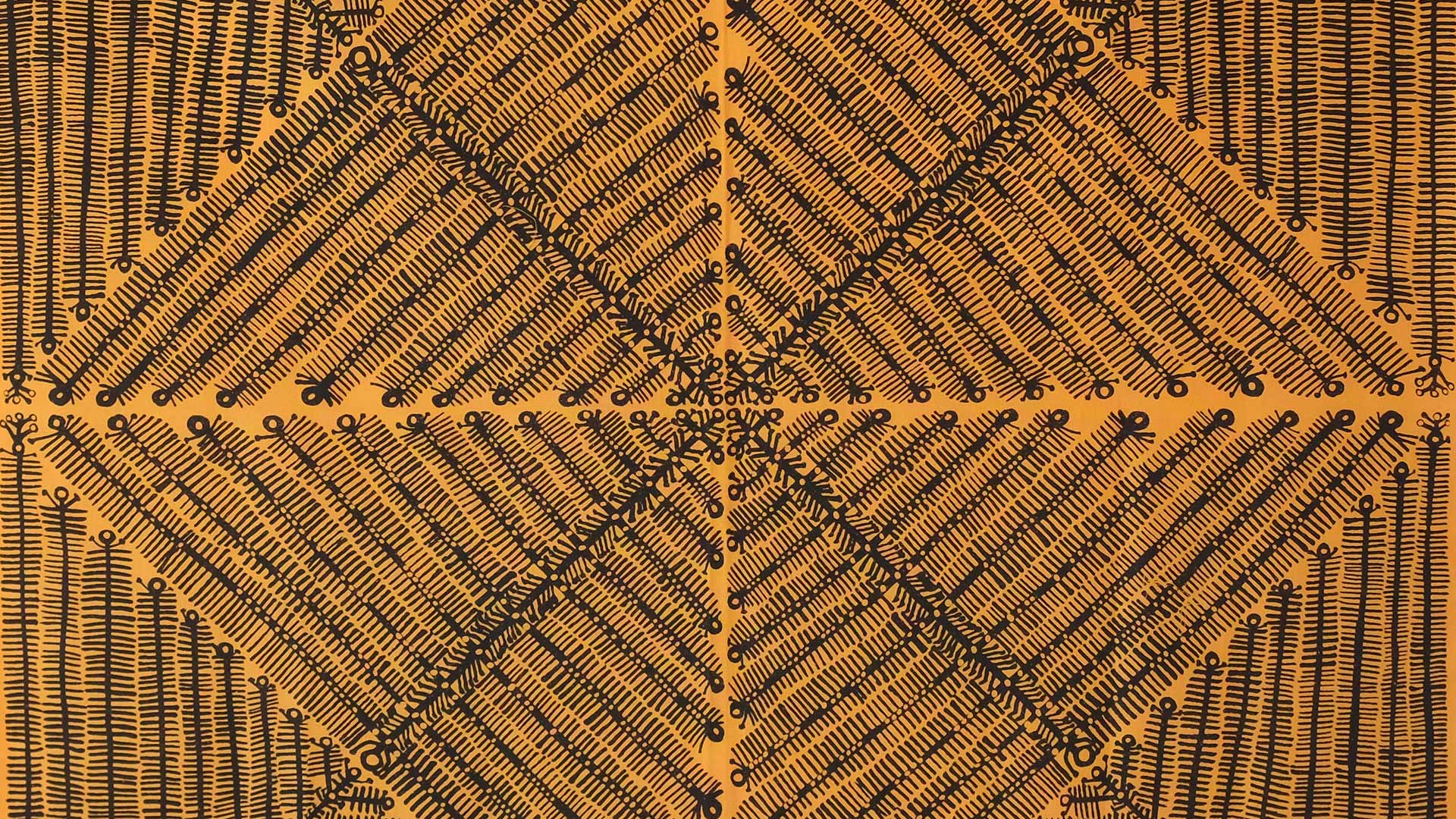 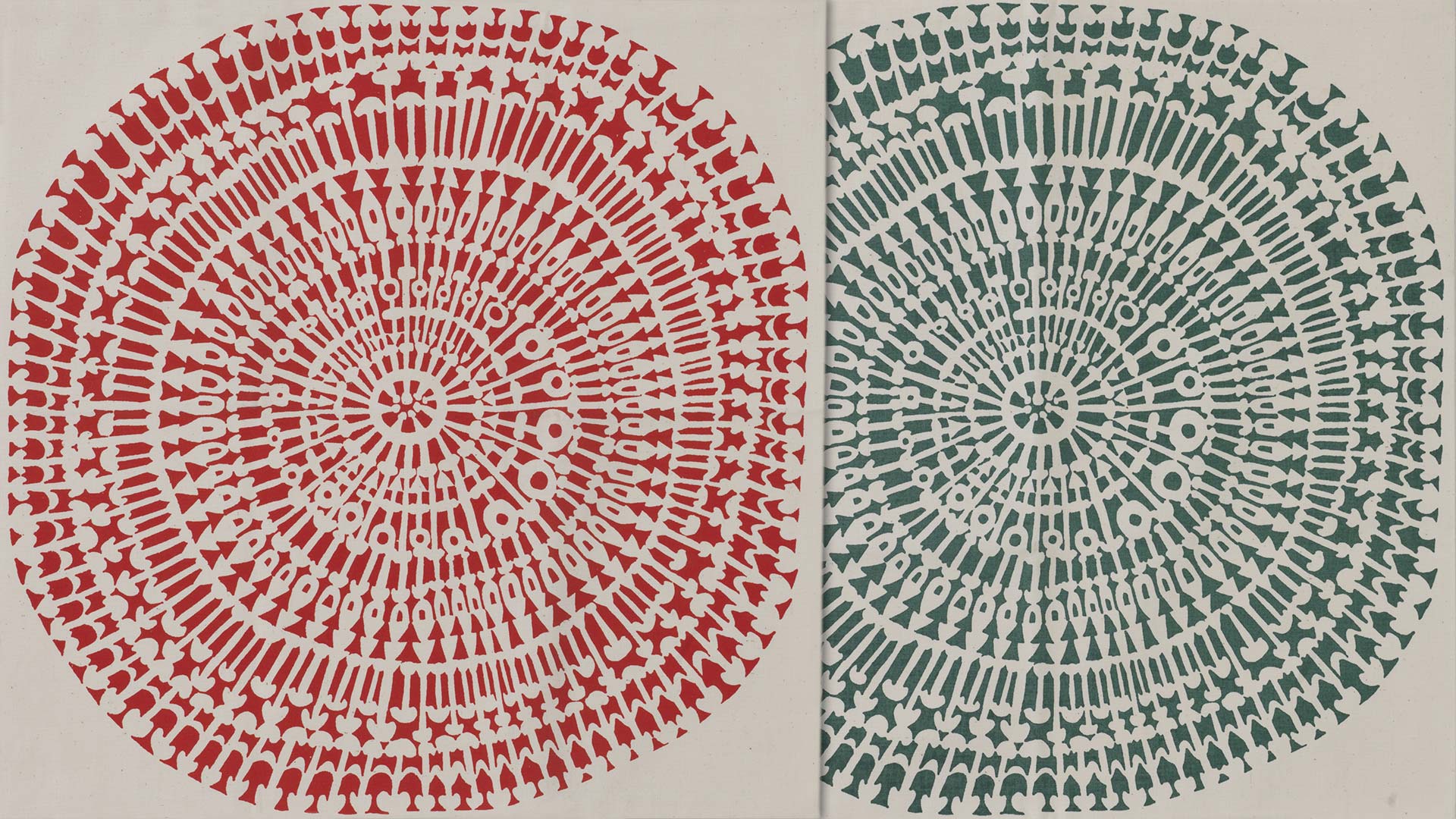 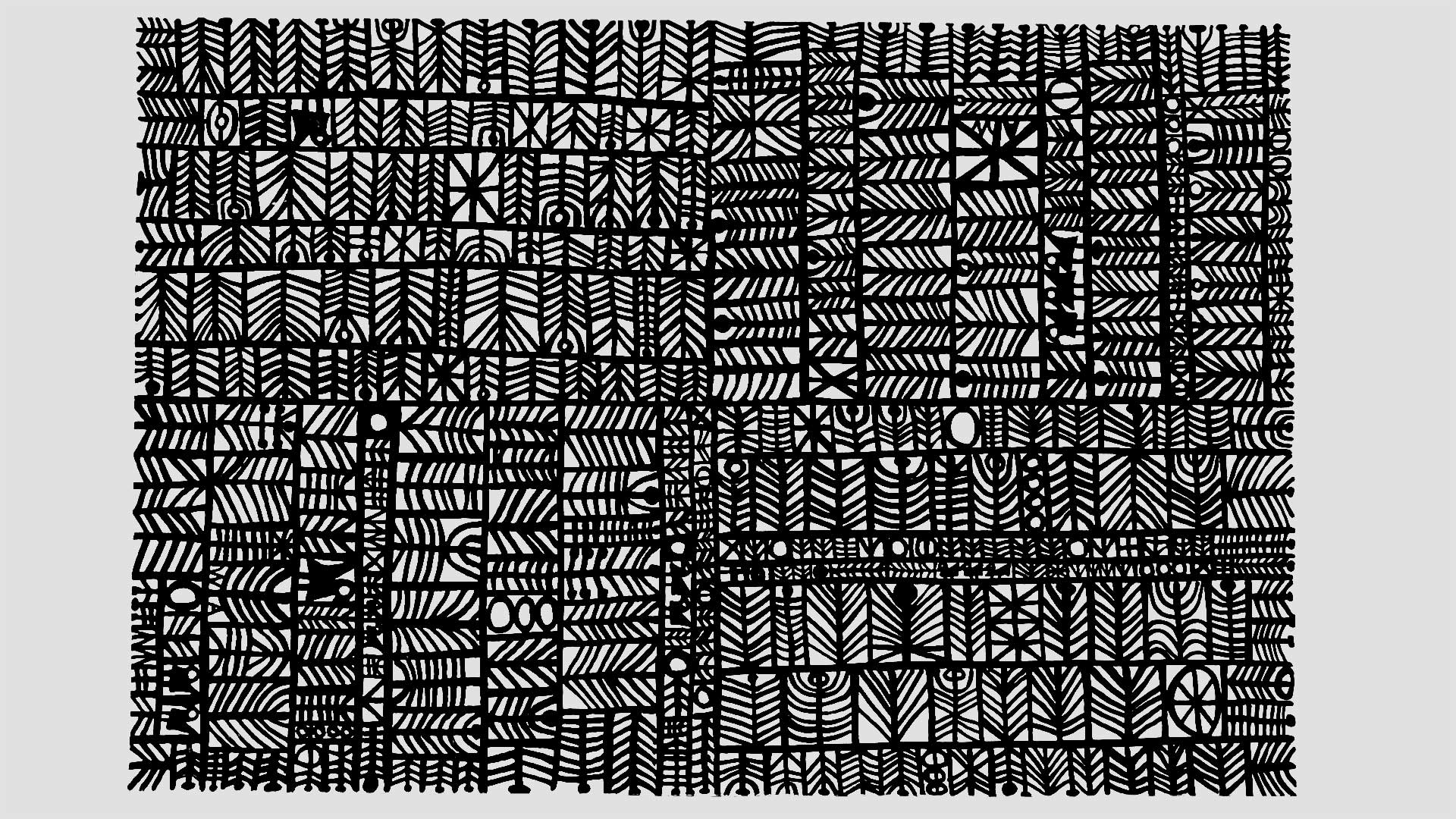 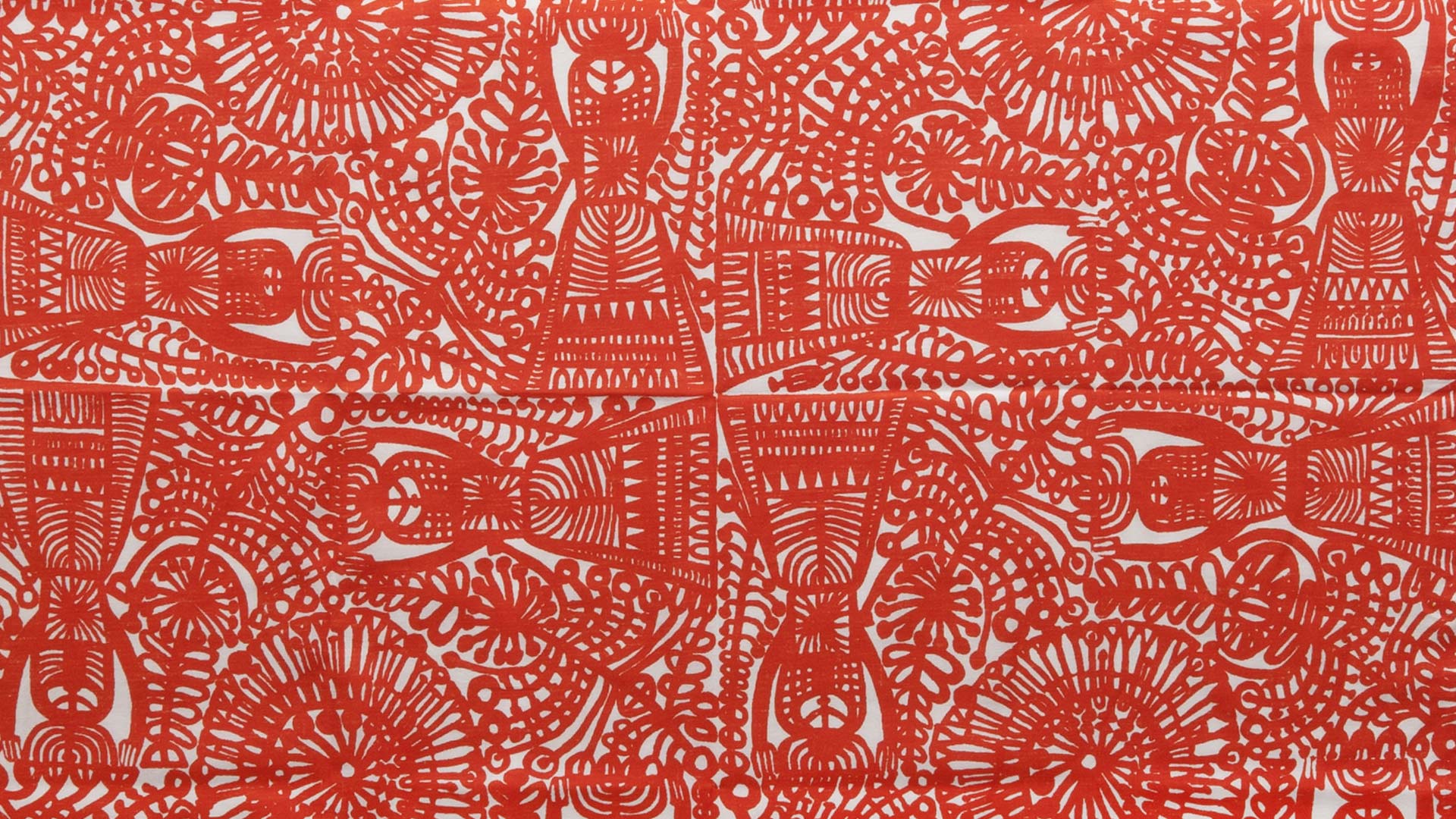 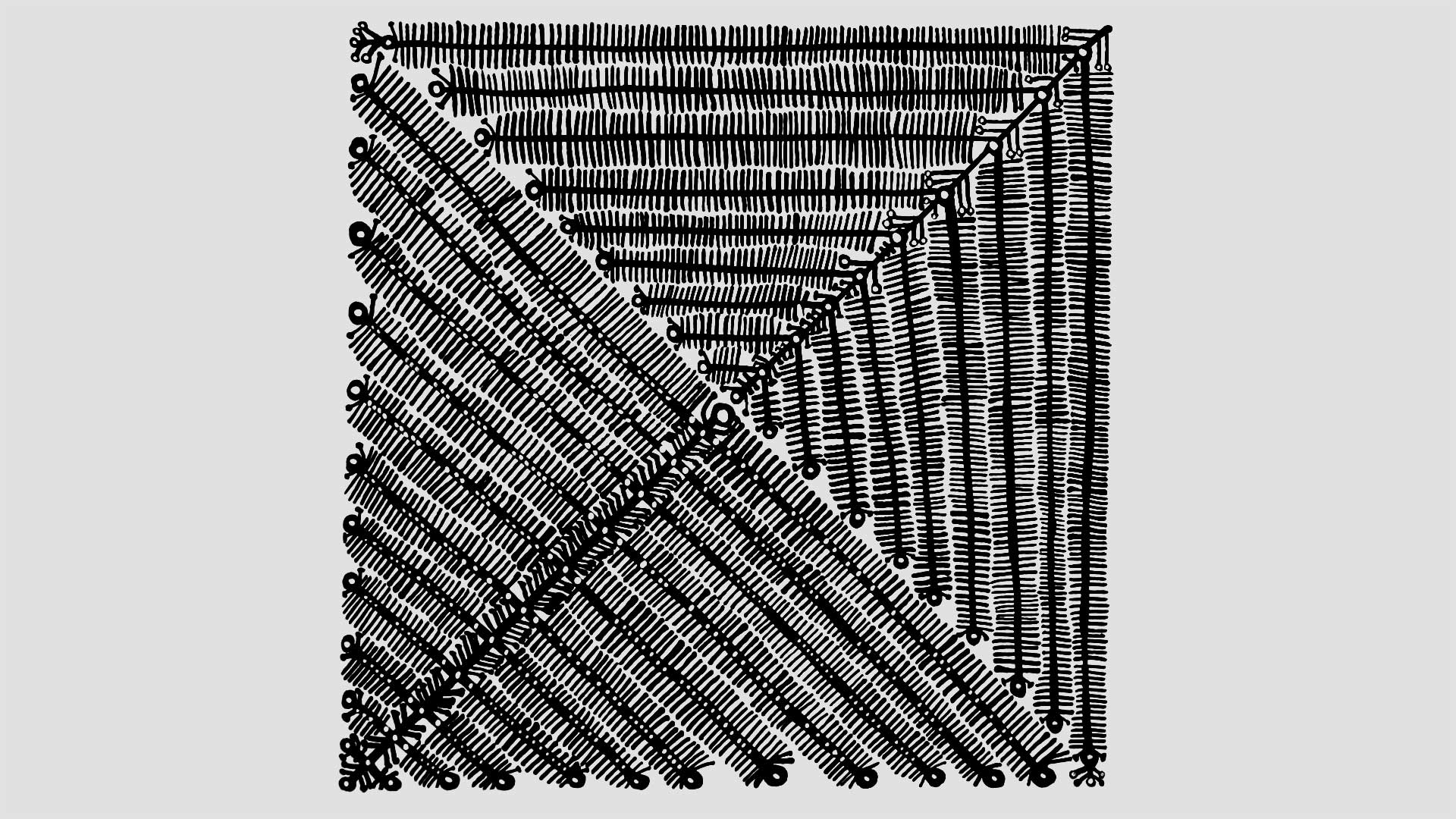 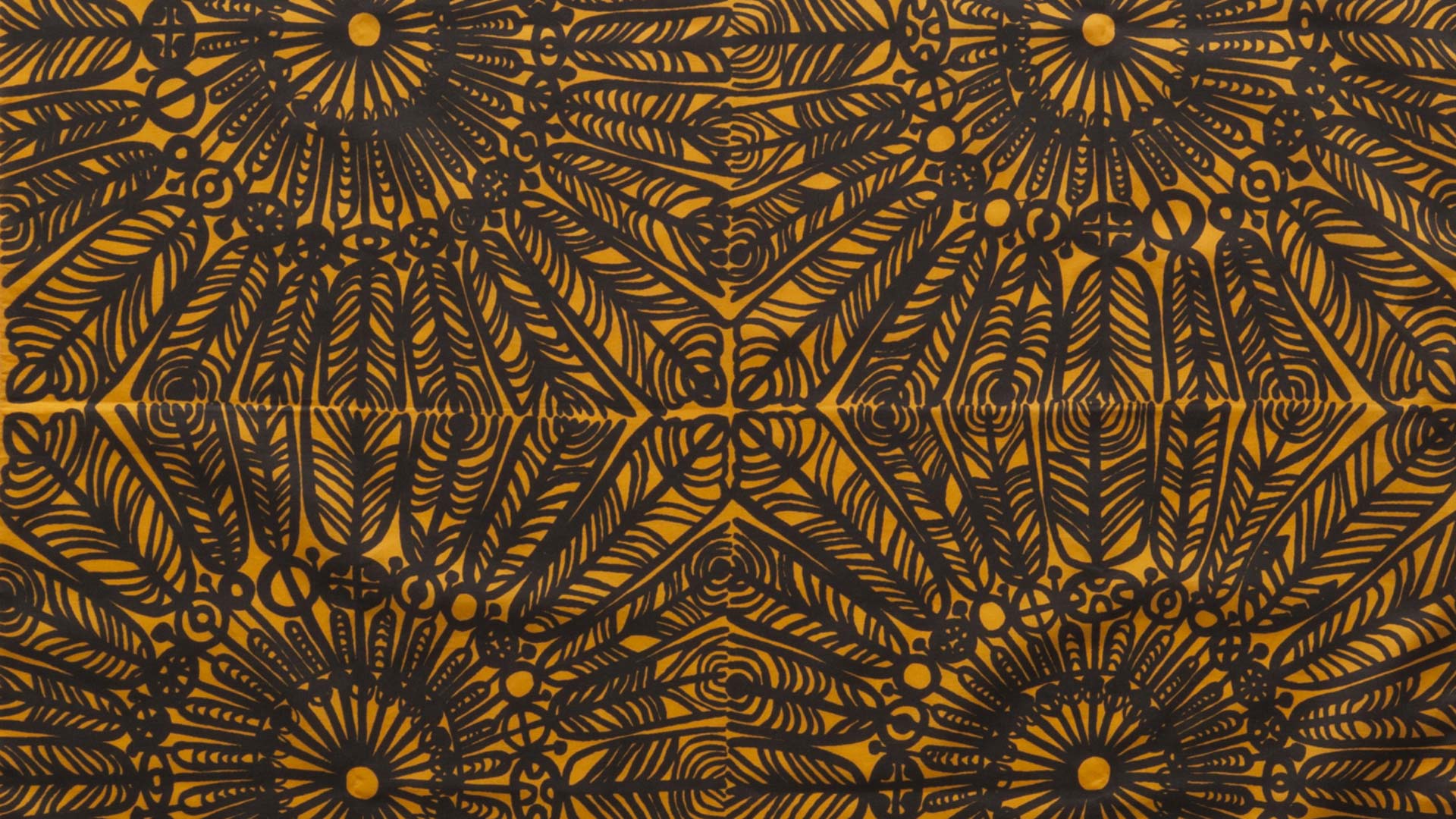 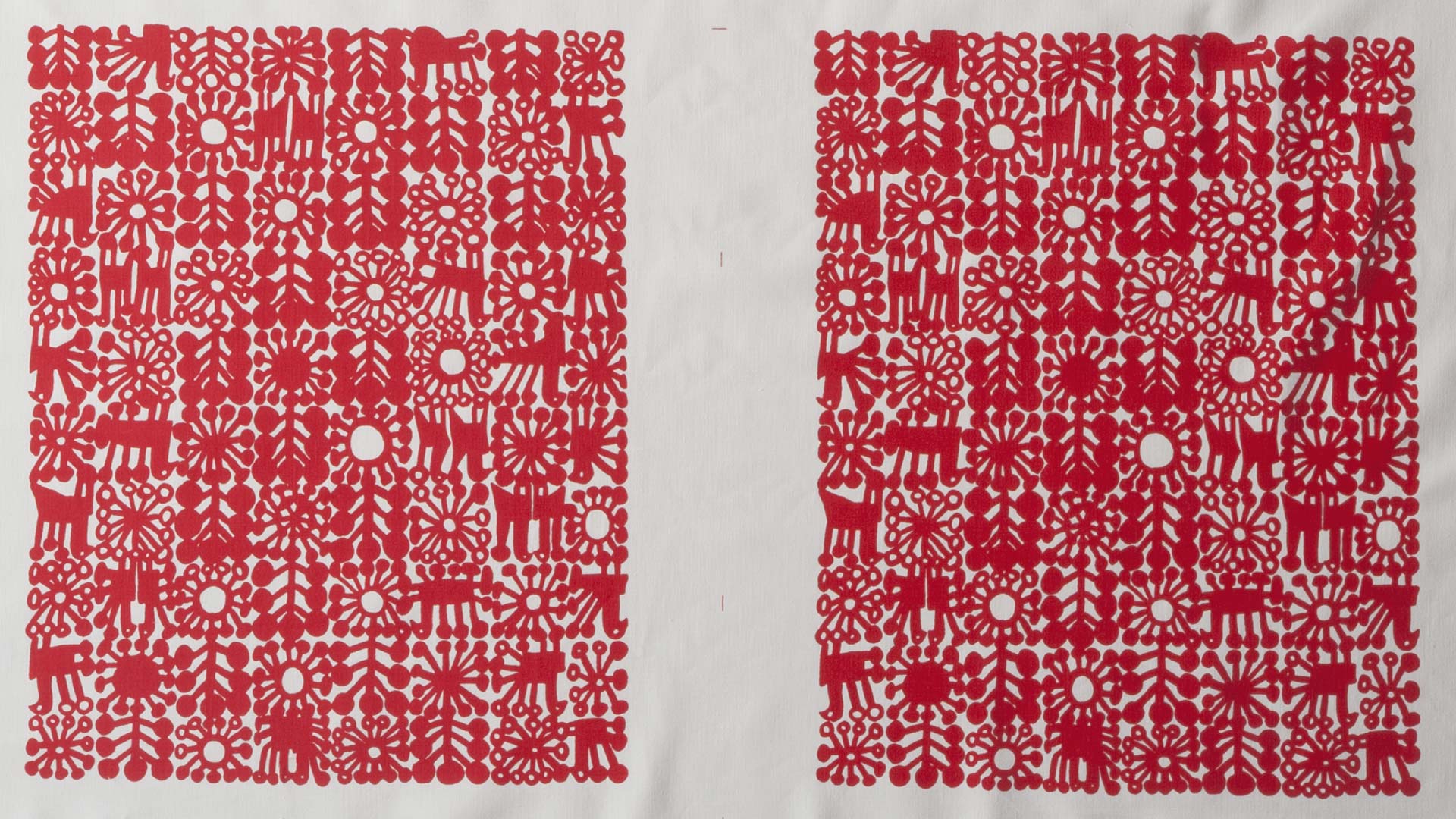 Erna Hitzberger was a textile designer and professor. She was head of the Department of Textile Design at the private School of Fashion and Textile in Berlin. Between 1948 and 1971 she taught textile design at the Folkwang School of Design in Essen where she developed an “alphabet of form” to make students understand possible compositions of forms. She met Otto and his wife Carmen in 1973 at the International Trade Fair of Fabrics and Textiles in Frankfurt, which marked the beginning of their collaboration. 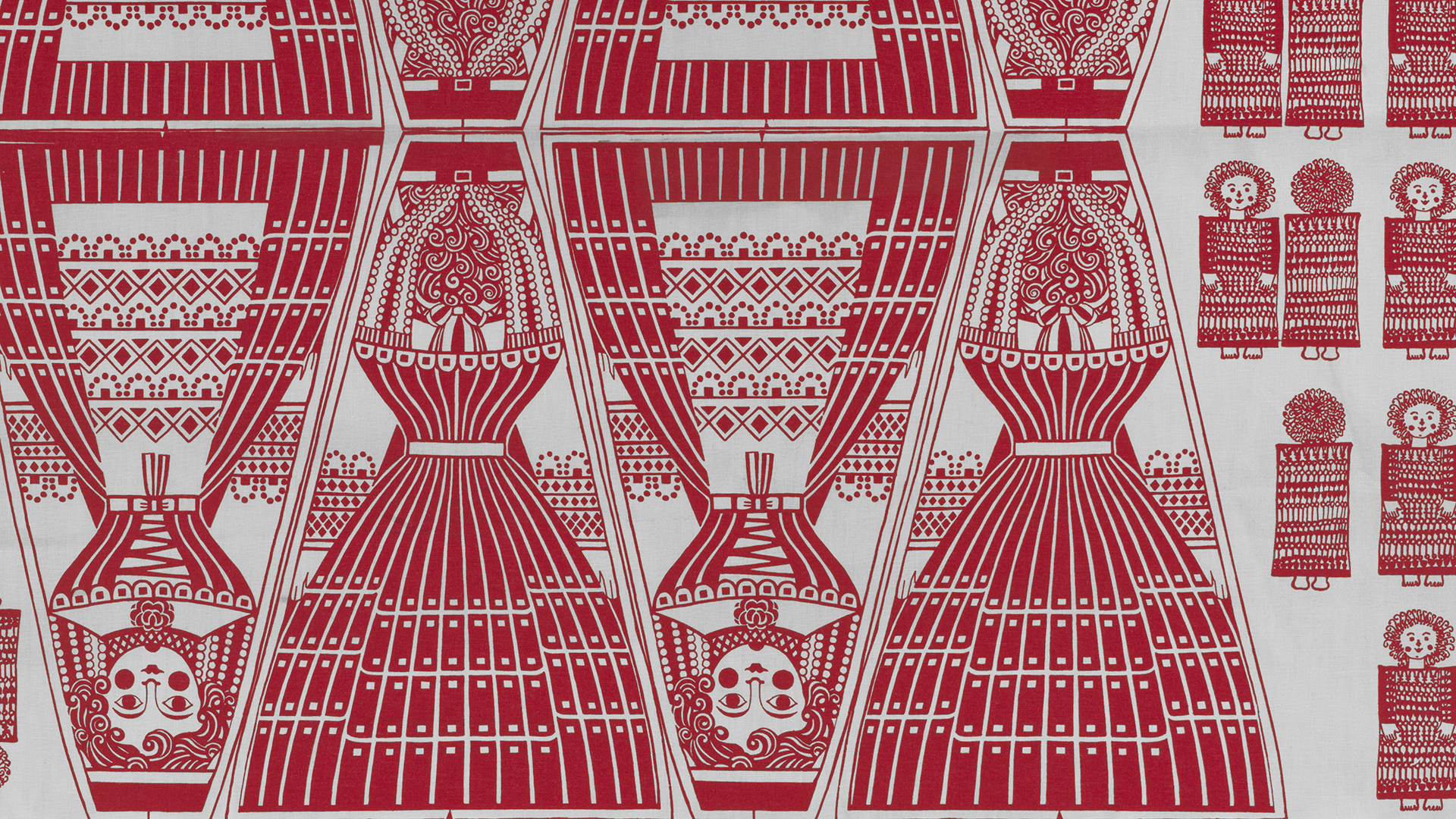 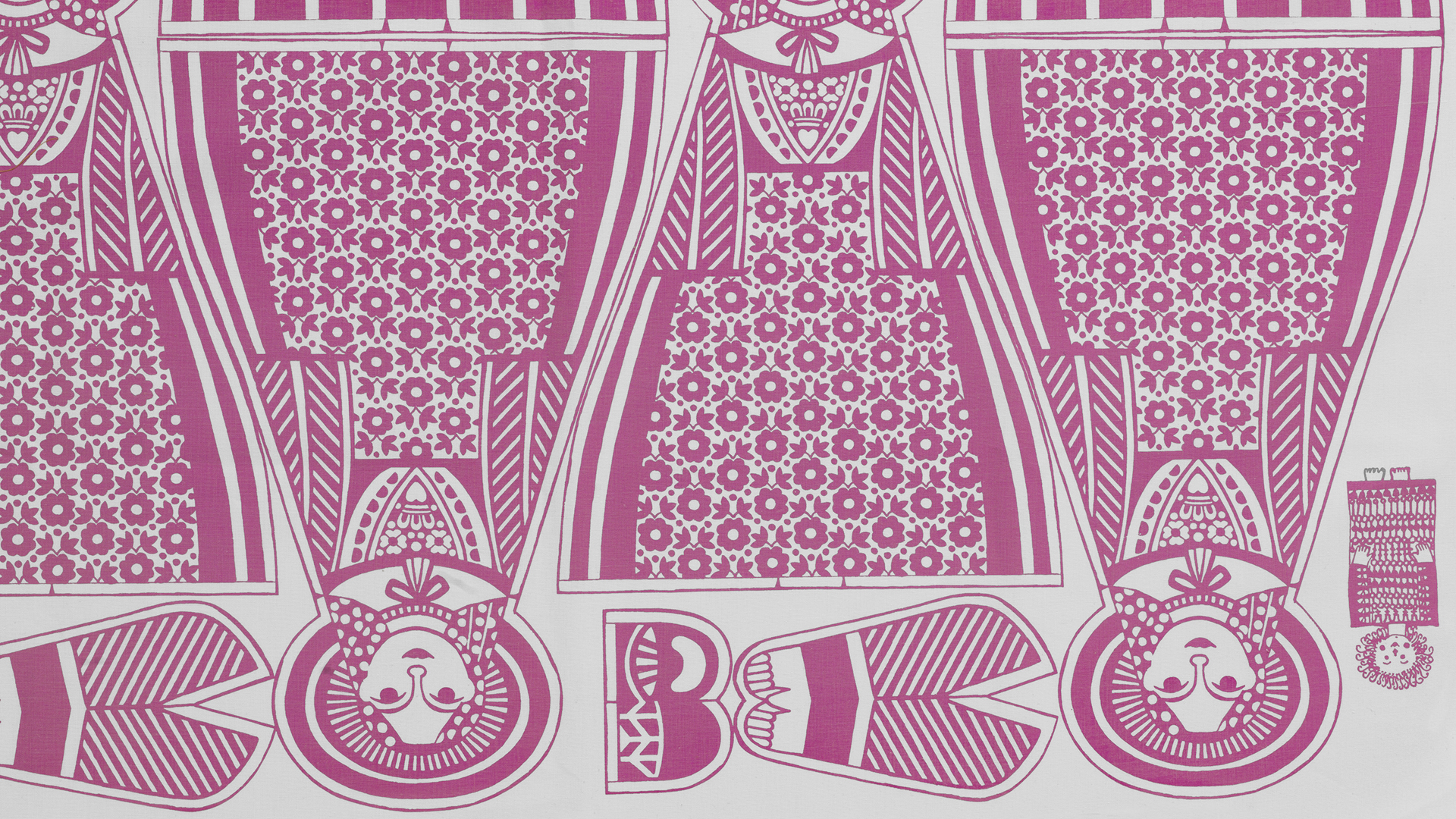 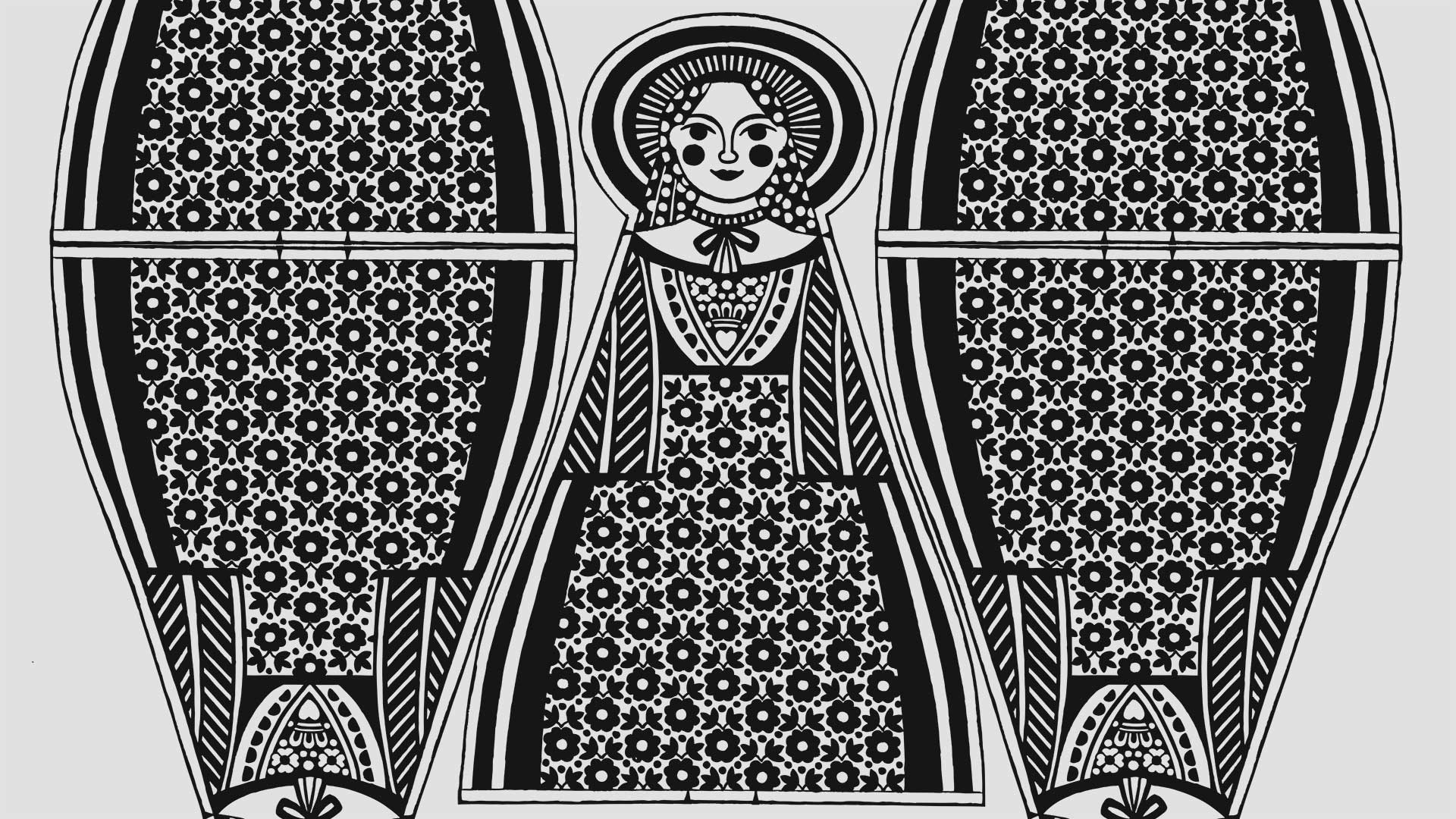 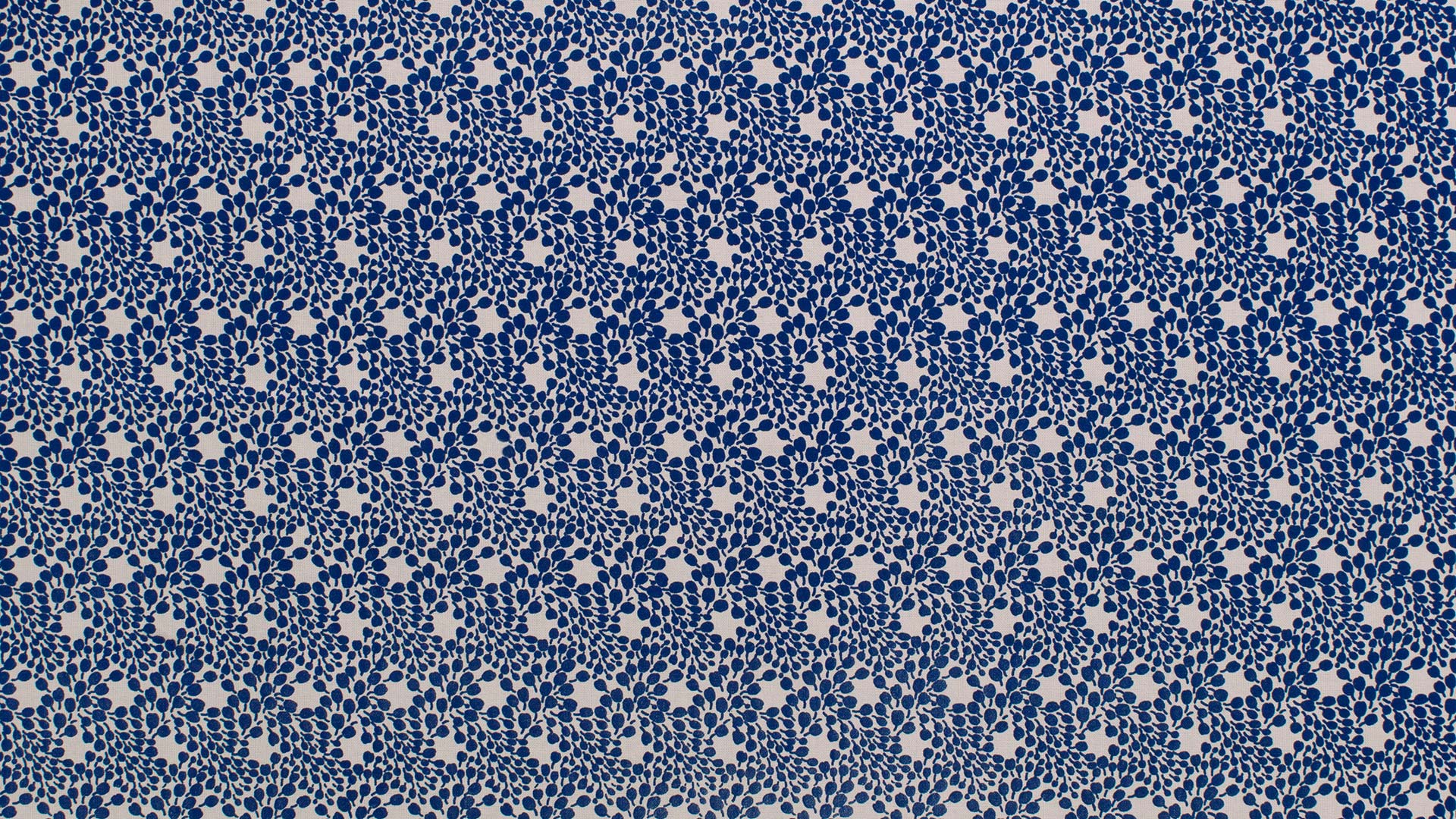 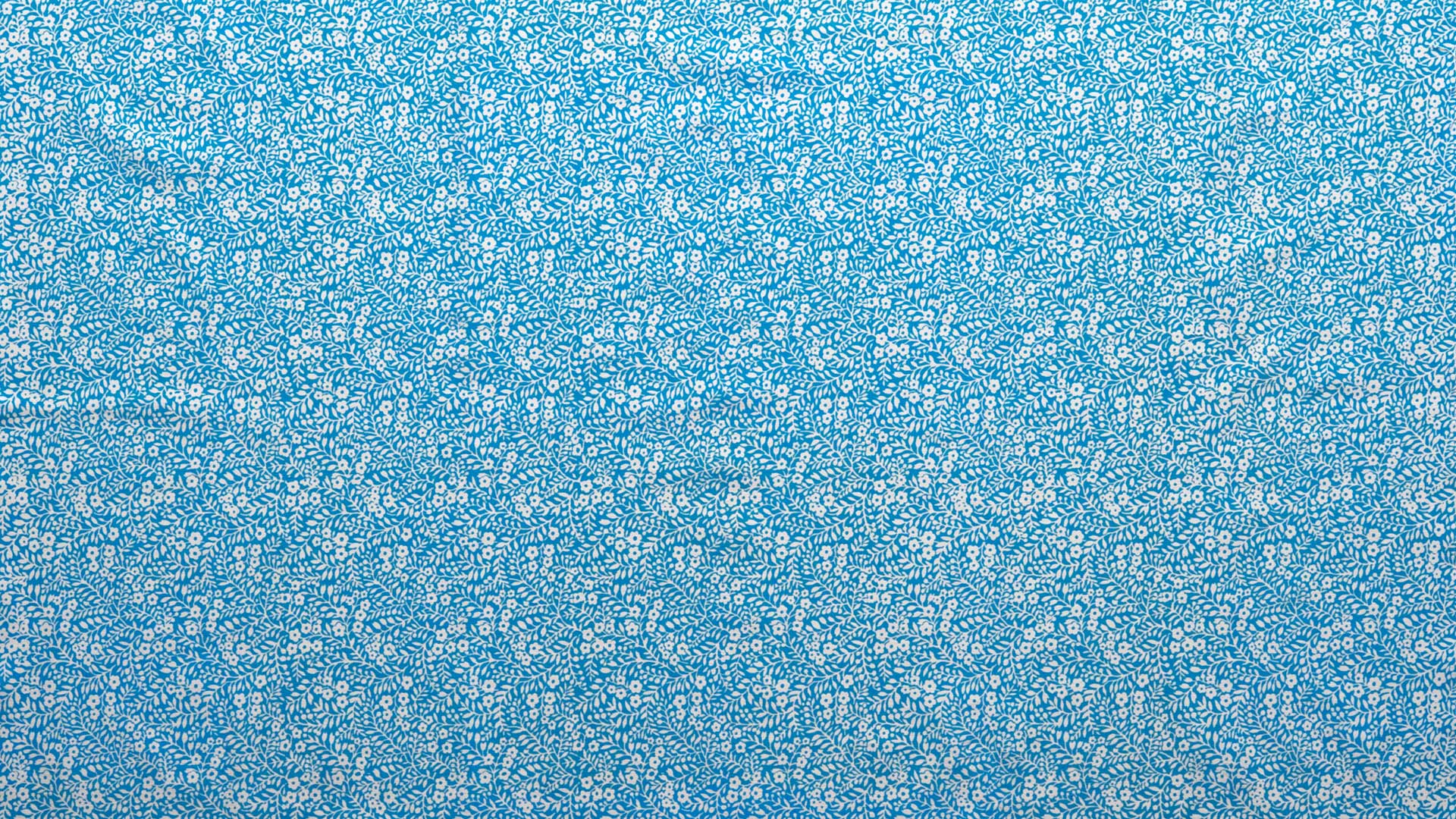 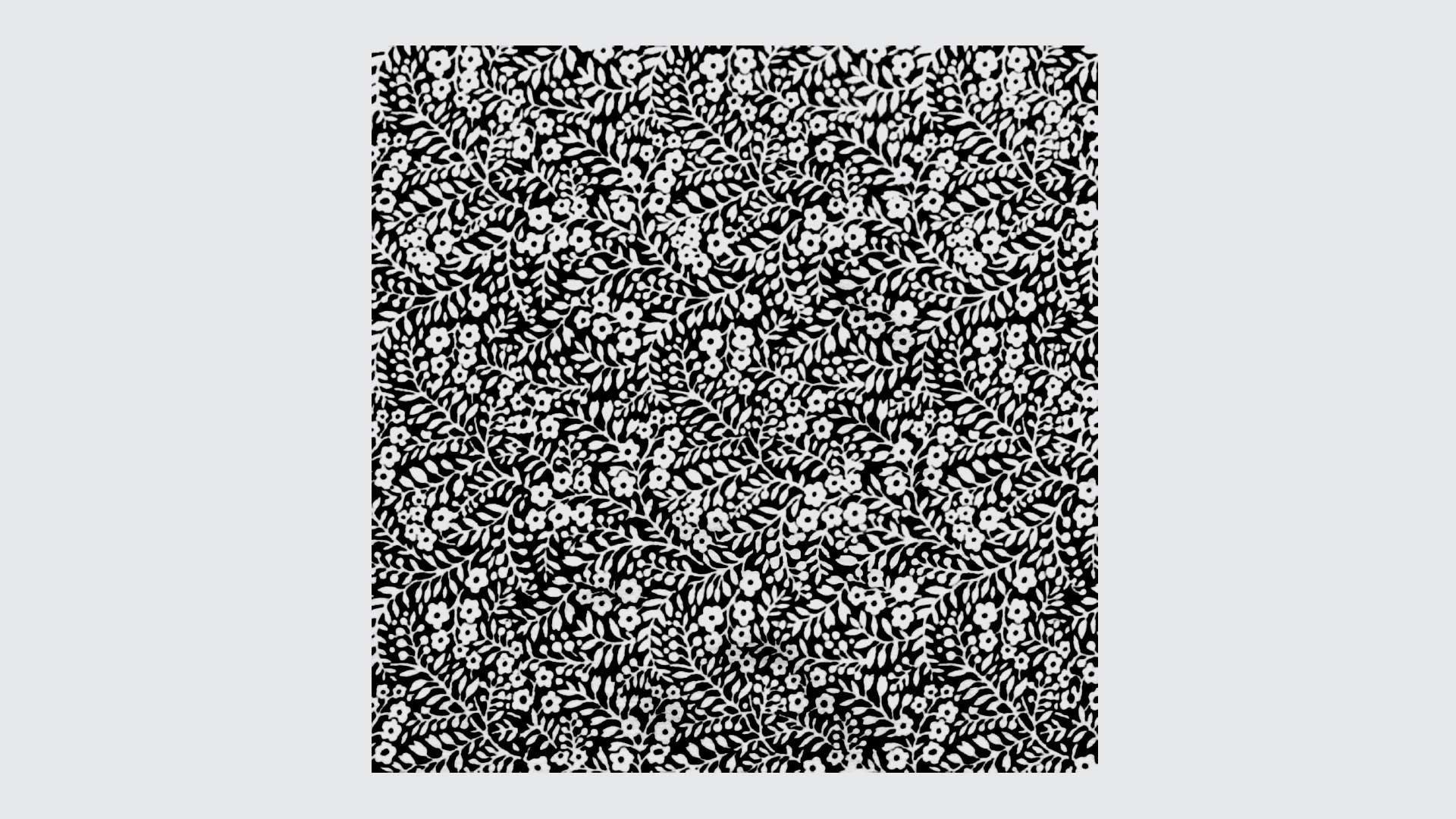 Anton Hofer was a South Tyrollean architect and designer. In 1912, after he graduated from the Kunstgewerbeschule in Wien he moved back to his hometown to start work in the field of architecture and design, collaborating with local handcraft companies. His contribution to Handdruck is limited to just a few drawings as during his collaboration with the collective he mostly designed patterns for woven carpets and blankets. 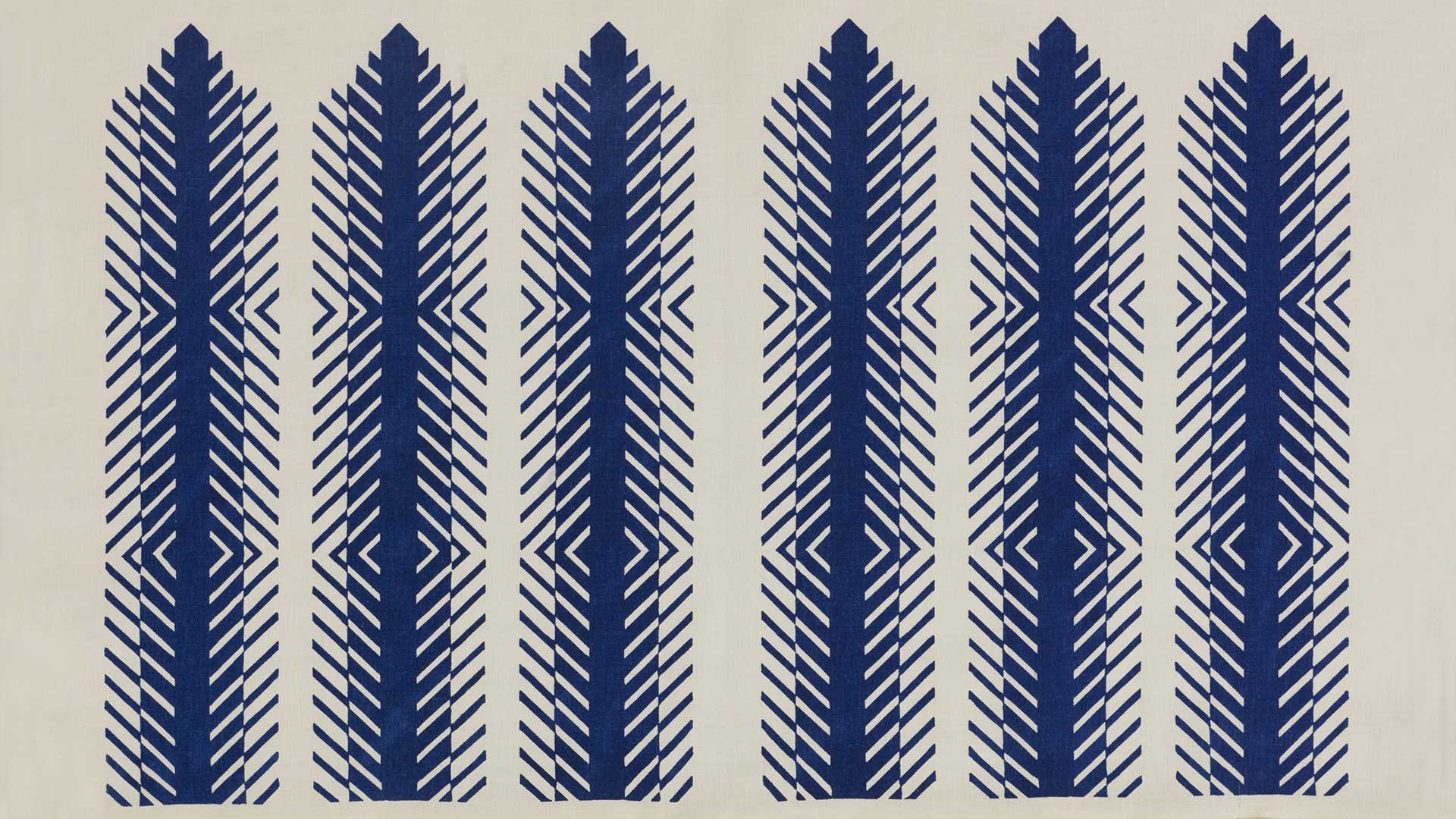 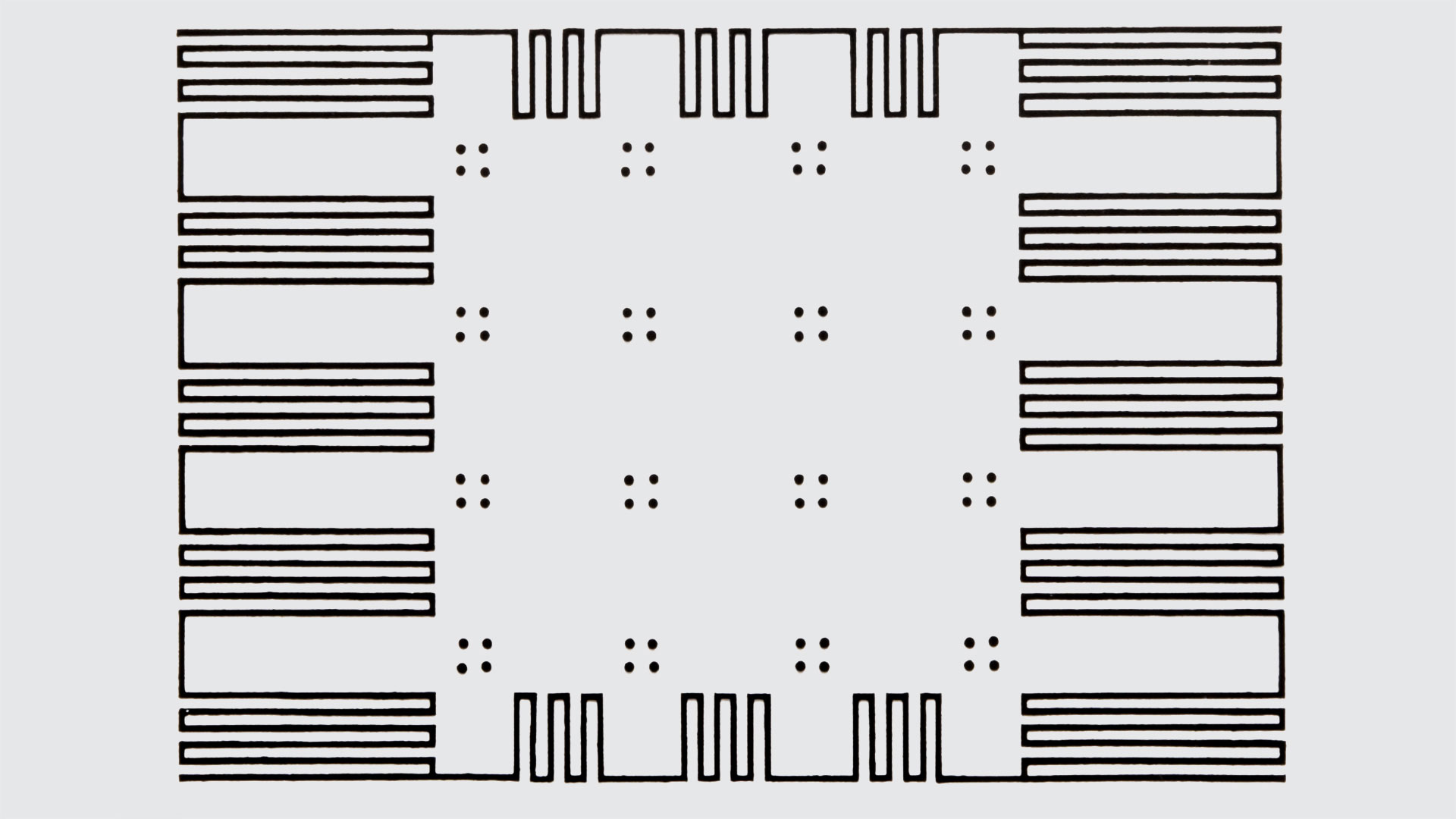 Carmen Von Aufschnaiter was an illustrator and painter. After studying at the Instituto de Arte e Diseño en Miraflores, she met Otto von Aufschnaiter. They married in Lima in 1969 and moved to Italy a year later to open their own shop, Aufburg. She started drawing patterns for textiles after meeting Erna Hitzberger in 1976. 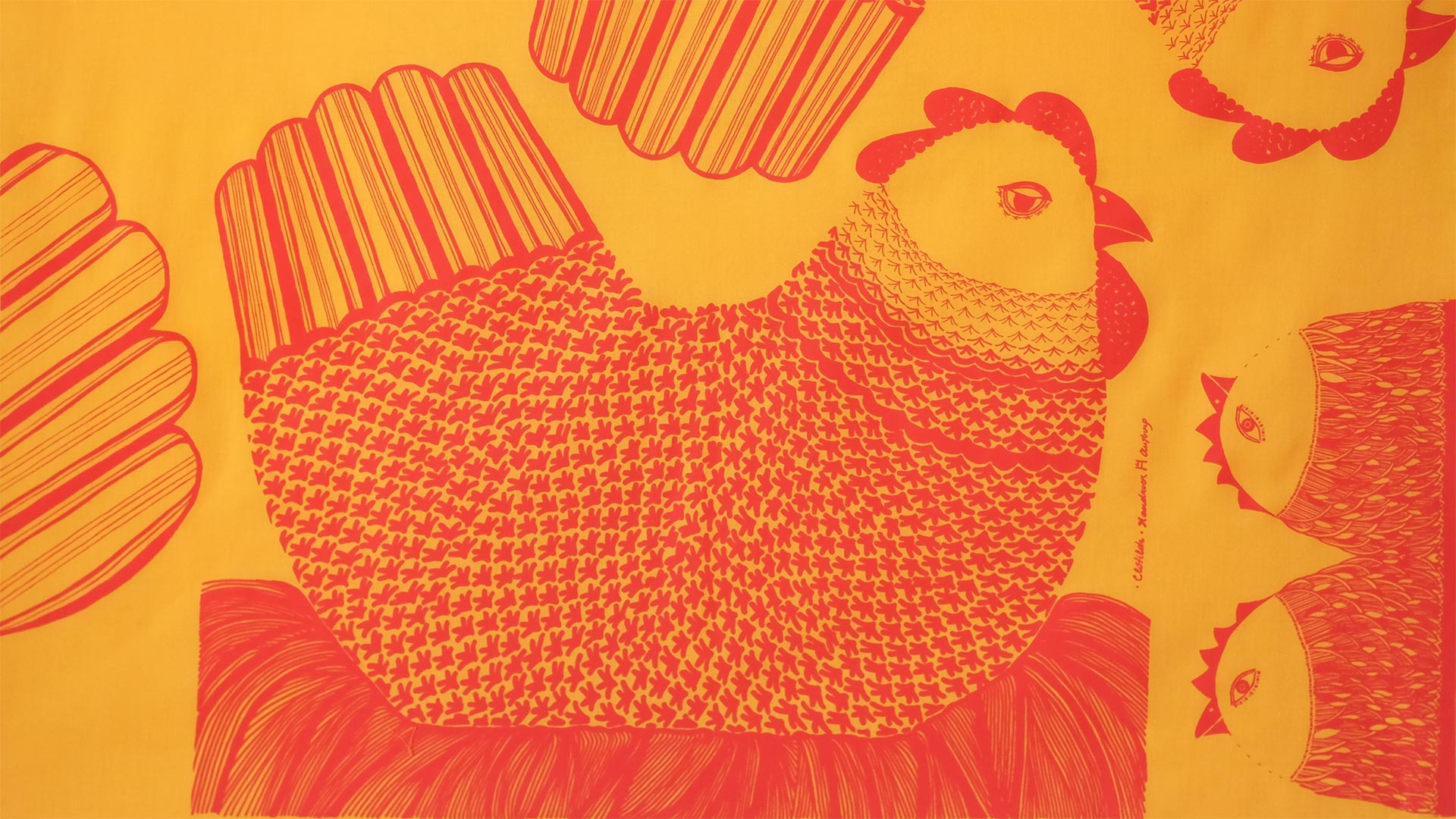 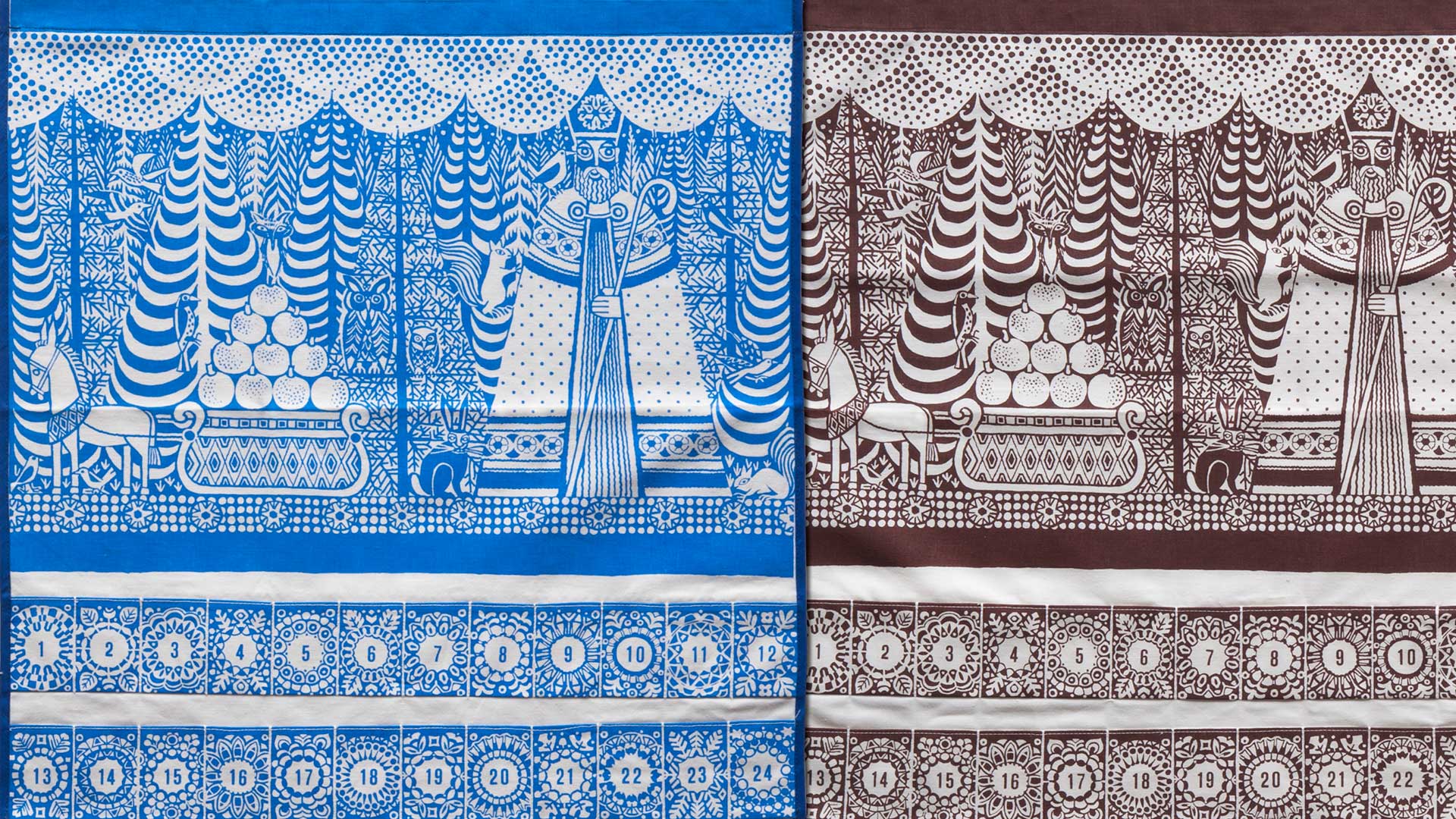 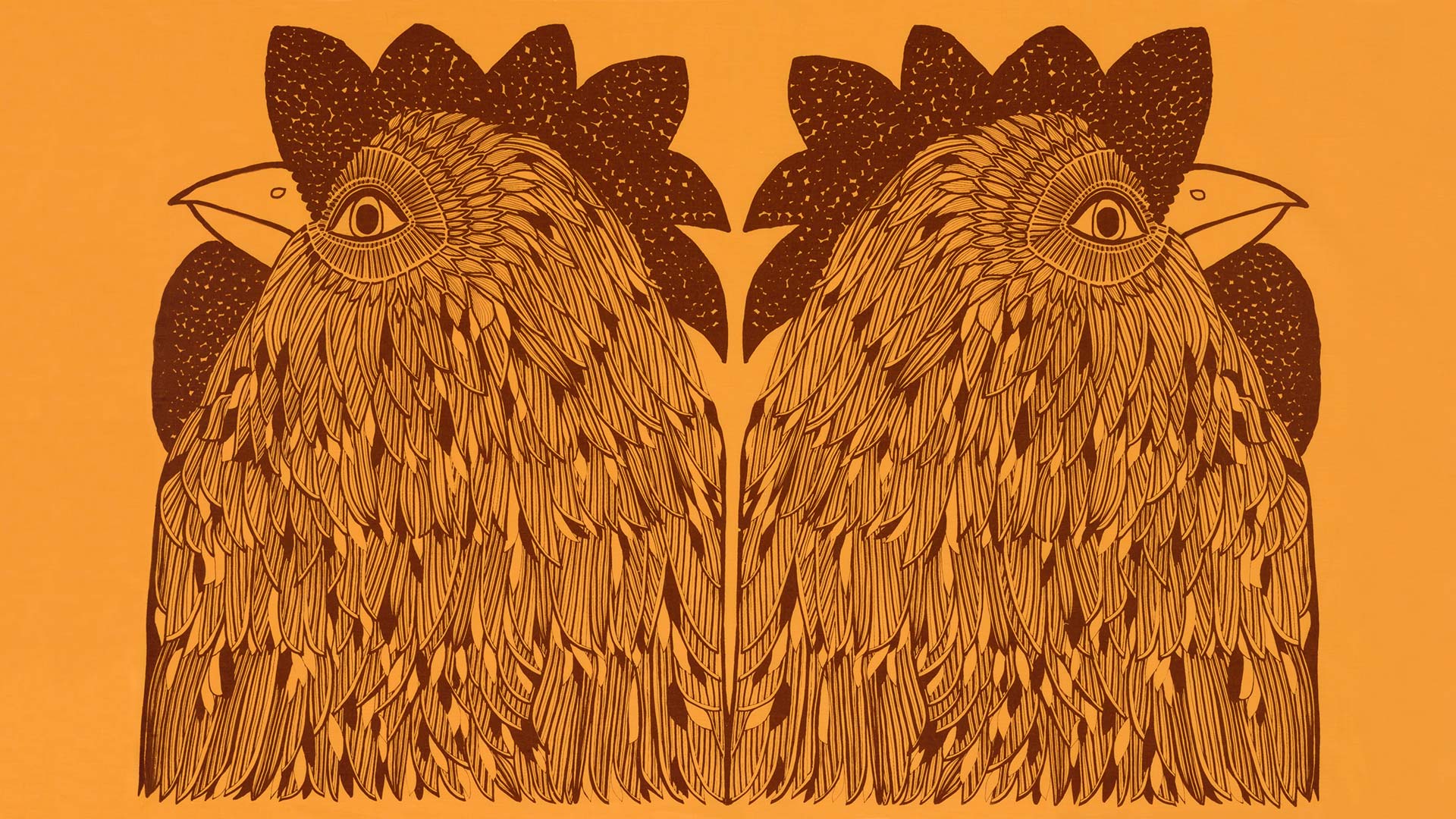 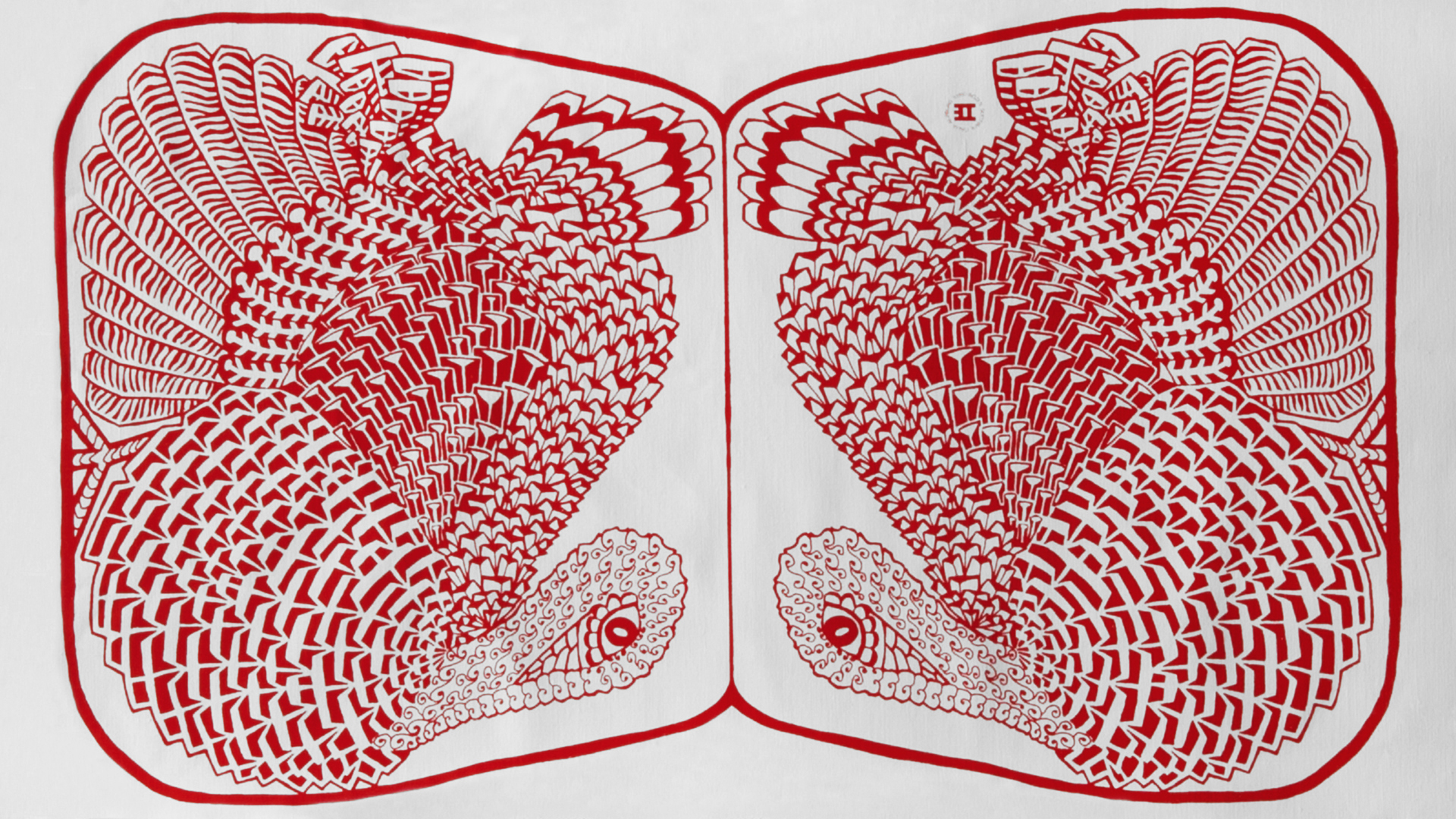 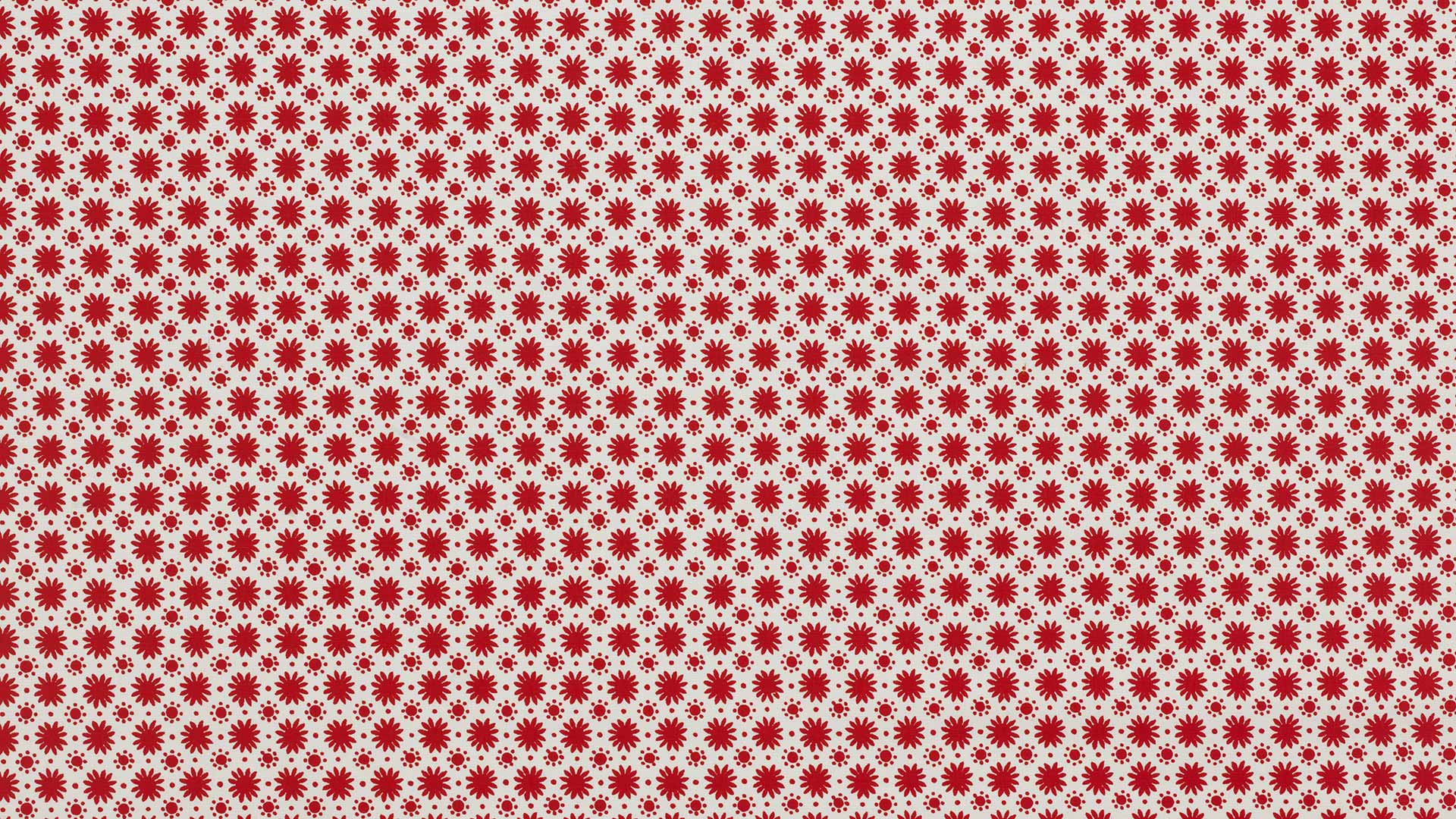 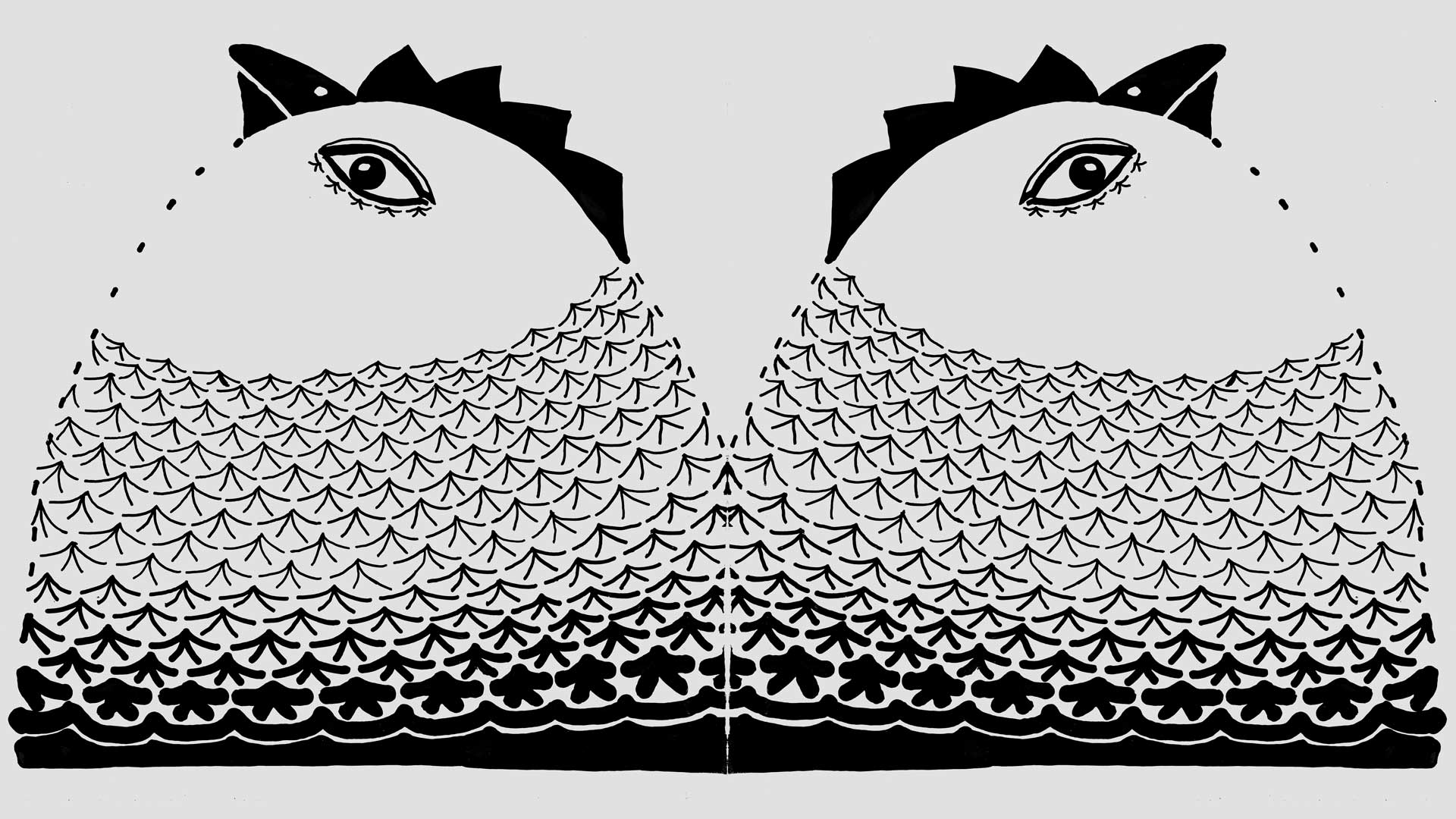 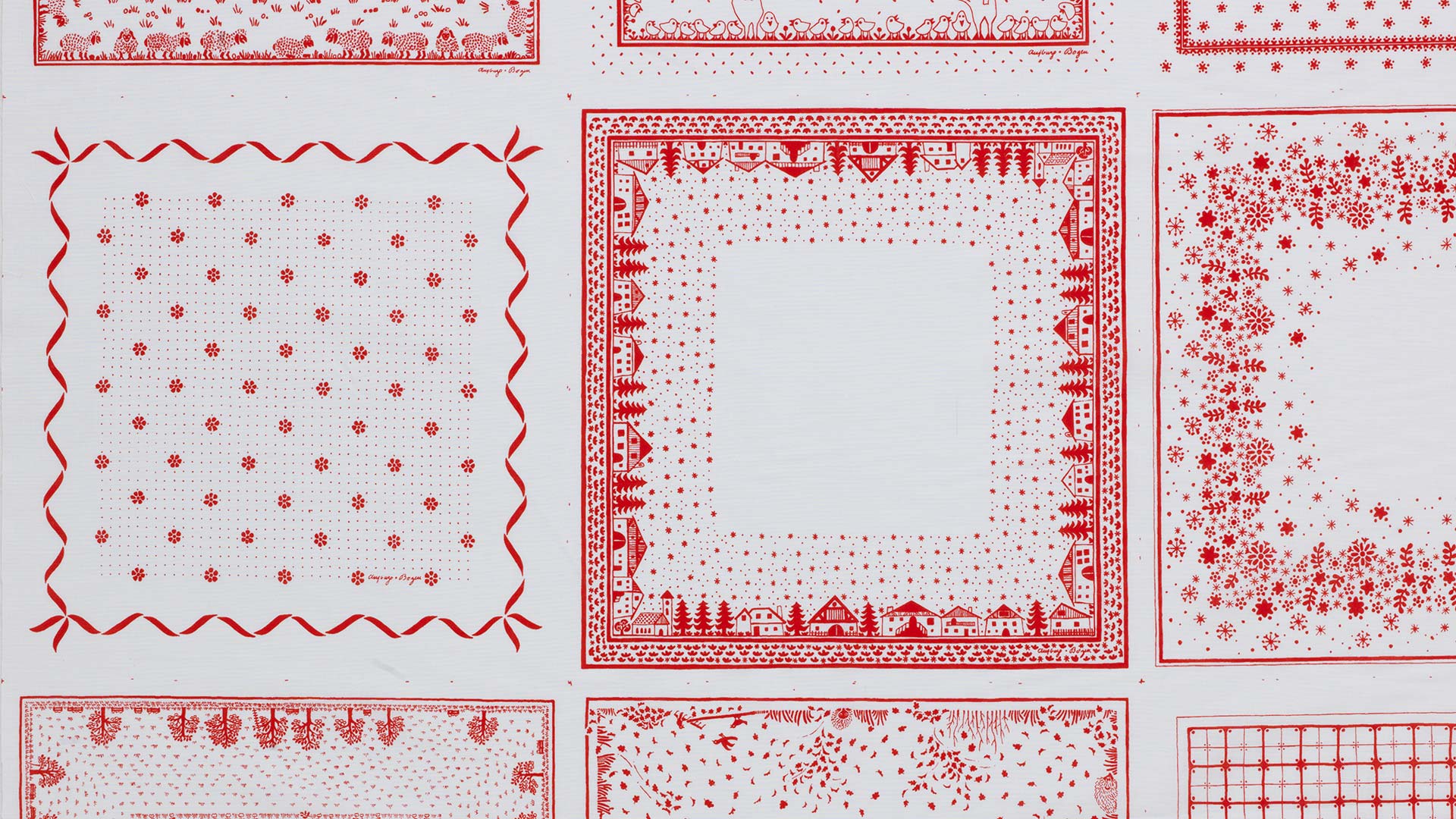 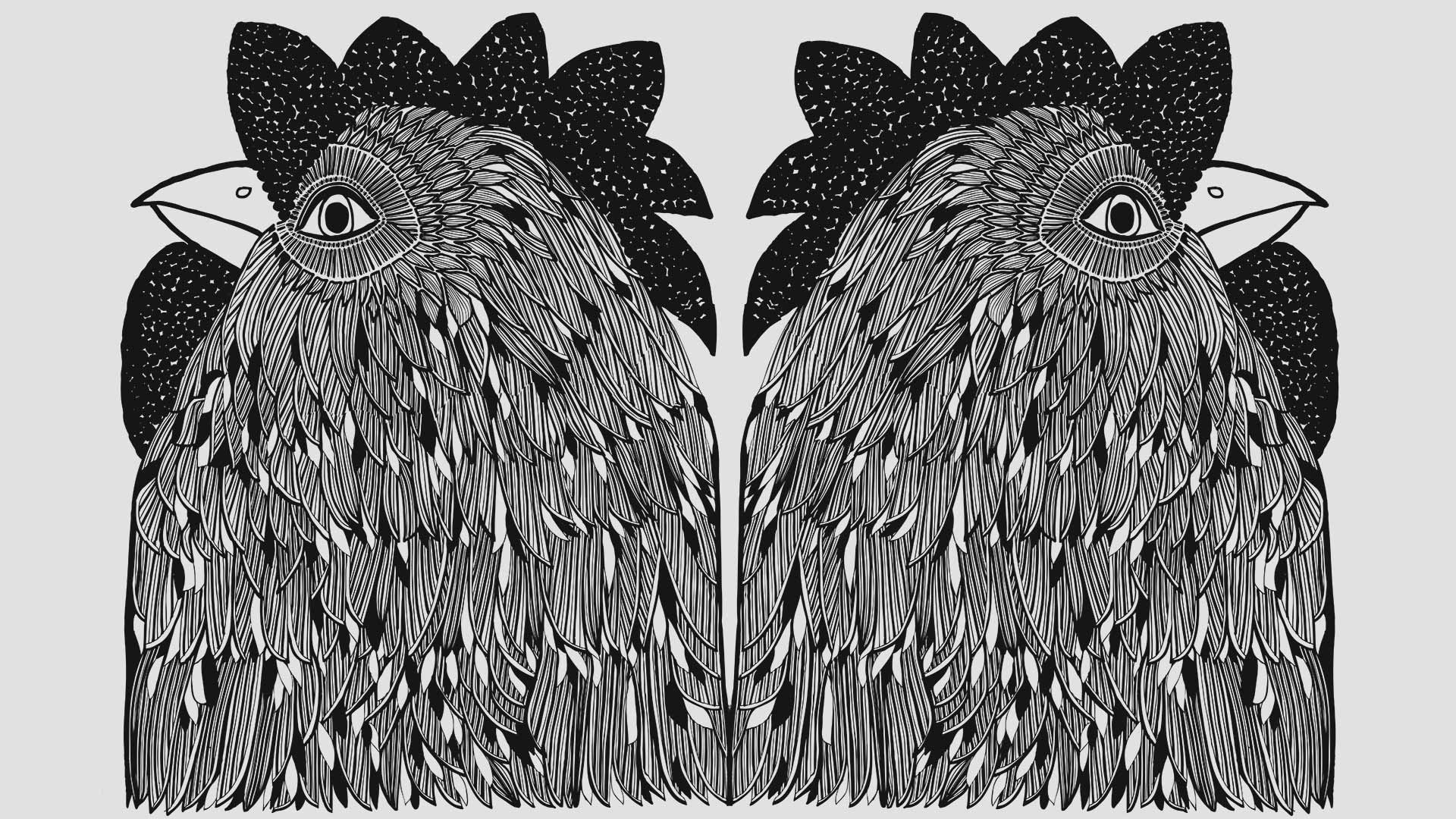 Most of these original fabrics are now stored in our archive and are available for temporary exhibitions. 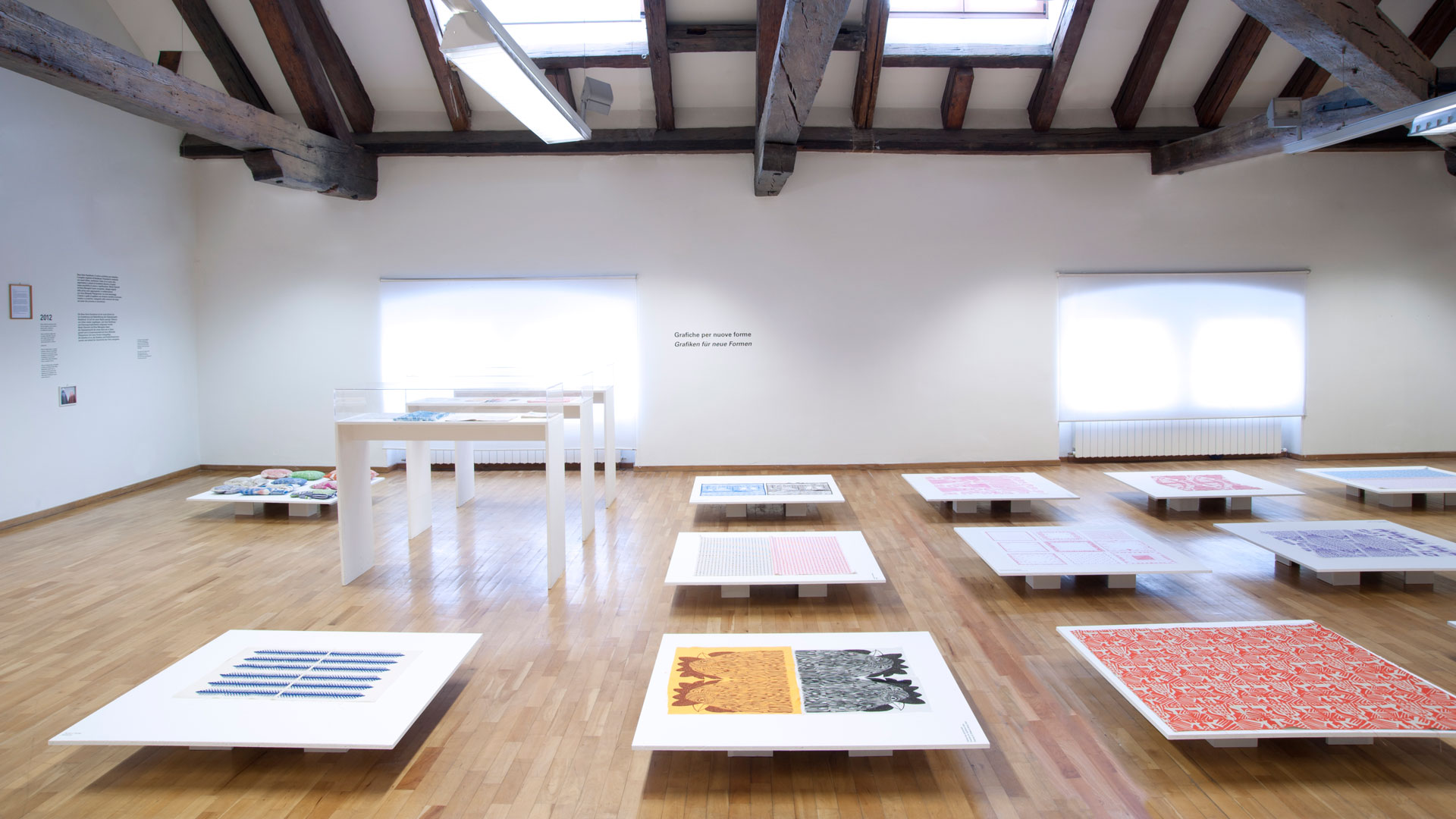 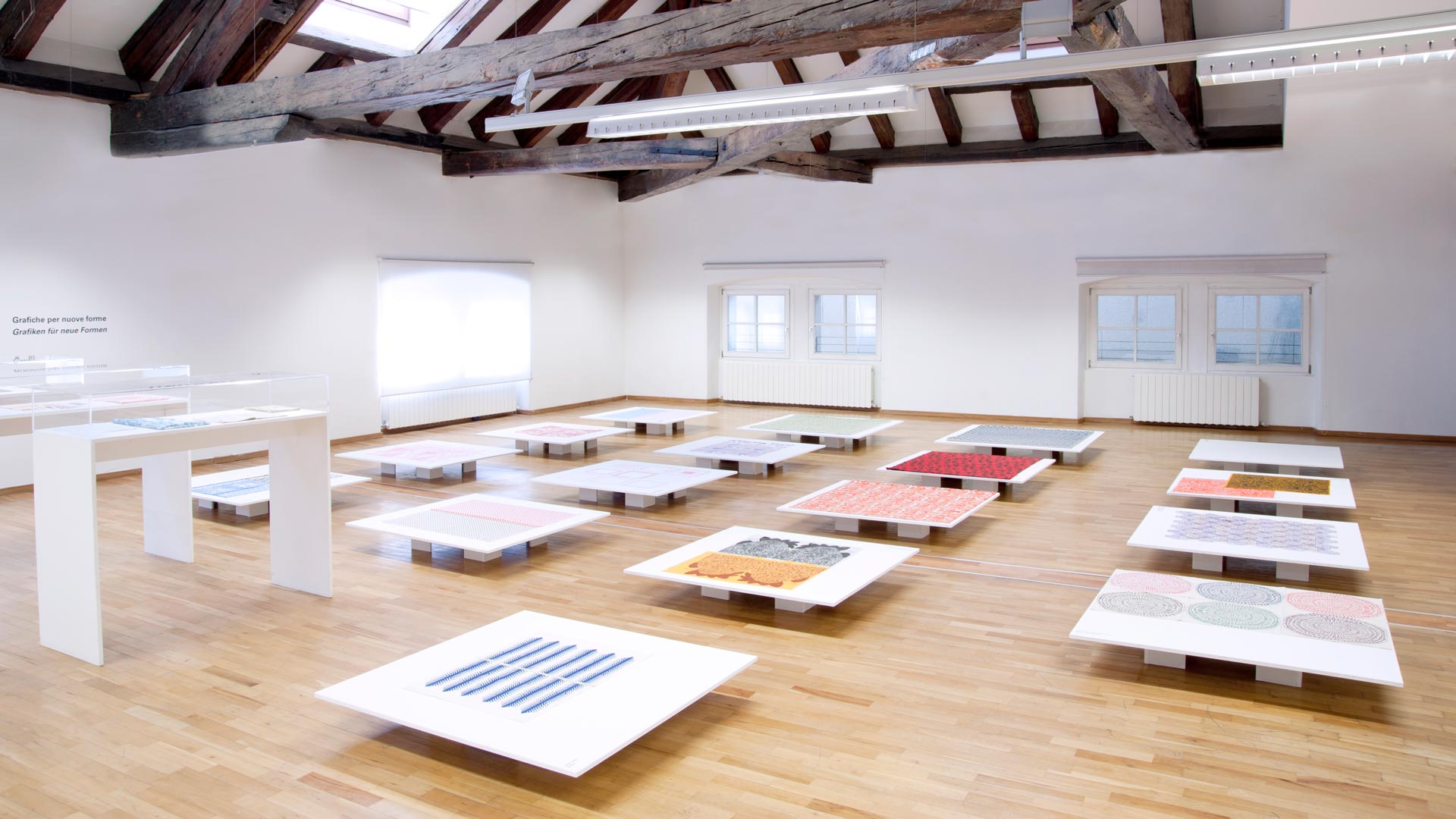 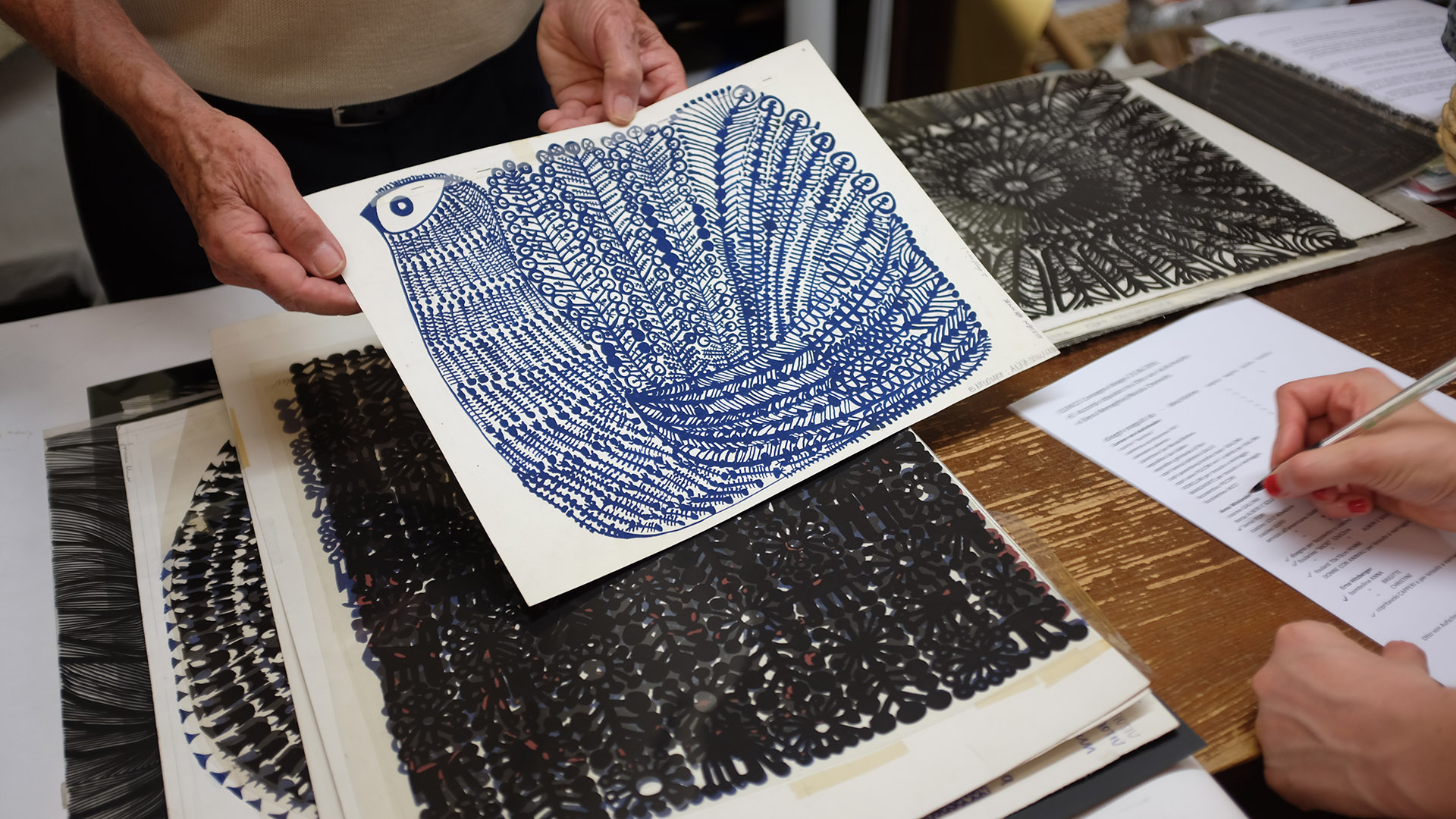 By following in the footsteps of textile and doll production, this work weaves together the small forms of life that objects possess with the related and creative forms of life that border on both languages and practices. The Neue Serie Handdruck collection illustrates the craft of working manually, using many different hands to invent patterns for textiles, kitchen tools, cushions and dolls. Reweaving this history of the work and the workers, attitudes and symbols, recalls the cultural memory of 1970s South Tyrol, Italy. This tells the story of a late – yet conscious and complex – version of Arts and Crafts, a collective’s political-creative gesture and the outcome of several different skills. The history of these textiles and objects brings together graphic design practices, alphabets of shapes, fragments of rural life, artistic memories as well as an aesthetic and objective reinvention of symbols. Partly inspired by local rock-carving, these symbols follow the trace of somebody else’s hands and thus allow us to gaze into the past. Through a small, yet dense, ethnographic practice this memory is reshaped and becomes a process, a testimony, an analysis which, at this point, becomes a series of dolls.

The Neue Serie Handdruck collection retraces, literally, the story of the production of material culture. The story of a family of sheepshearers and hand-weavers. The story of textile printing. The story of Otto Von Aufschnaiter and his Peruvian wife Carmen, an illustrator, and their self-built screen printing workshop. Two systems of signs and shapes – an alphabet of gestures, an alphabet of communication, the outlines of Erna Hitzberger’s didactic practice in Berlin and Essen, and the artistic practice of Anna Wielander Platzgummer. Both the systems of signs, and both the authors, make reference to nature, to its way of communicating and to our constant need to reinvent it. However, the Neue Serie Handdruck collection brings new life to dolls and fabrics by re-enacting the experience of 70’s design, thus allowing us to envision the life of the original objects, revealing how they may have survived, which stories deserve to be discovered, and the destiny of both the dolls and their owners.

Objects form both good and bad relationships, but hopefully – for the most part – good. A design, a good design, points to an object’s possible future relationships and experiences, pointing to its potential biography and to those who can make good use of it.

The Neue Serie Handdruck collection is an occasion for the authors’ ethnographic memories, and an occasion for the ethnographic memories and public life of signs and objects. To quote Hölderlin‘s epigraph, cultural memory integrates, however slightly, the fleeting image of time. Since this weakness is a part of us – the life of objects, their biography, the life of those who produce and invent them, as well as those who enable the object to have a place in this world by trading it – this image of time deserves an ethnography. Such is the necessity of memory within objects and in the things that restore life and practices in us all. Design is tied to the context of experience, indeed to the origin, but above all to the outcome of experience itself. At least in this case.

If you exit this section, you will have to restart the buying process.

NSH uses cookies to provide you with the best experience on our website. By continuing to browse the site you are agreeing to our use of cookies. Read more